No impact on Pak from arms deal with India: White House

The administration official said that they would avoid a situation that could escalate the tension between India and Pakistan. 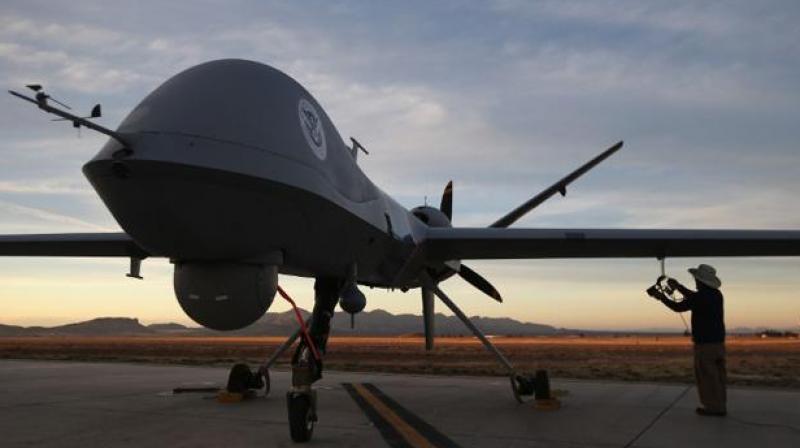 The US-based company that makes the drones, General Atomics Aeronautical Systems Inc, said on Friday that the US government had approved the sale of a naval variant of the Predator drone to India. (Photo: AP)

Washington: With the United States expected to authorise India's purchase of naval drones, a senior White House official cautioned on Friday that any US military transfer to India would not represent a threat to its neighbour Pakistan.

The official spoke to reporters in advance of US President Donald Trump's first meeting with PM Narendra Modi tomorrow, a White House visit that will include one-on-one talks and a working dinner.

Securing agreement on the purchase of 22 unarmed drones, worth more than $2 billion, is seen in New Delhi as a key test of defence ties that flourished under former President Barack Obama but have drifted under US President Trump, who has courted Asian rival China as he seeks Beijing's help to contain North Korea's nuclear programme.

The US-based company that makes the drones, General Atomics Aeronautical Systems Inc, said on Friday that the US government had approved the sale of a naval variant of the Predator drone to India.

The senior White House official said any arms transfer would take into account the regional situation.

"Some of the defence systems we're talking about we don't believe impact Pakistan," the official added.

The Indian navy wants the surveillance drones, variants of the Predator drones, to keep watch over the Indian Ocean. The deal would be the first such purchase by a country that is not a member of North Atlantic Treaty Organization.

India, a big buyer of US arms that was recently named by Washington as a major defence ally, wants to protect its 7,500- km (4,700-mile) coastline as Beijing expands its maritime trade routes and Chinese submarines increasingly lurk in regional waters.

But sources tracking the discussions say the US State Department has been concerned about the potential destabilising impact of introducing high-tech drones into South Asia, where tensions are simmering between India and Pakistan, particularly over Kashmir.

Such a sale of sensitive military hardware must be authorized by the State Department before being sent to Congress for review. The drone deal would still require approval by Congress. The State Department declined comment ahead of any notification.

Defence cooperation, the US trade deficit with India, counter-terrorism efforts and regional tensions are expected to be discussed between the two leaders.

PM Modi's two-day visit to Washington begins tomorrow. US President Trump met Chinese President Xi Jinping in April and has also had face time with the leaders of nations including Japan, Britain and Vietnam since taking office in January, prompting anxiety in New Delhi that India is no longer a priority in Washington.

Other strains have emerged in US-India relations, with the United States vexed by a growing bilateral trade deficit and US President Trump accusing New Delhi of negotiating unscrupulously at the Paris climate talks to walk away with billions in aid.

US officials expect a relatively low-key visit by PM Modi, without the fanfare of some of his previous trips to the United States, and one geared to giving the Indian leader the chance to get to know US President Trump personally and to show that he is doing so.

India and the United States will also discuss the sale of US fighter jets during PM Modi's trip, in what could be the biggest deal since they began deepening defence ties more than a decade ago.