Amid applause, Mr Modi said both Houses of Parliament passed this with a two-thirds majority. 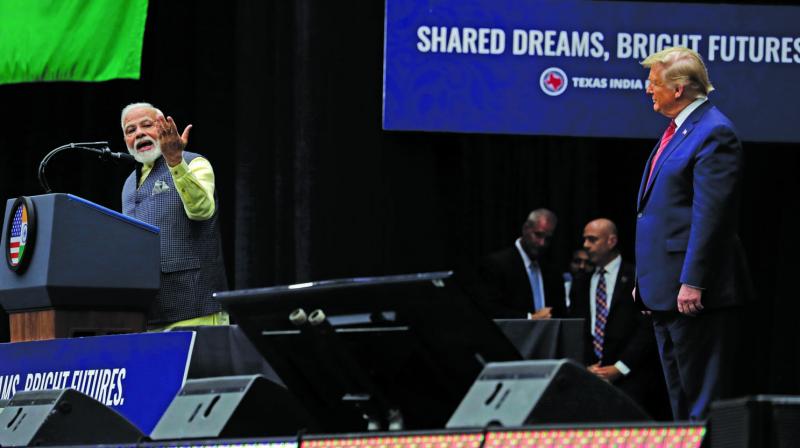 Houston: Prime Minister Narendra Modi on Sunday hit out at Pakistan for its support to terrorism and said India’s decision to nullify Article 370 has caused trouble to those who cannot handle their country as he called for a “decisive battle” against terrorism.

Making a strong pitch against terrorism at the “Howdy, Modi” event in the presence of US President Donald Trump, who joined the mega event in a rare gesture of friendship, Mr Modi asked the 50,000-strong crowd of Indian-Americans to give Mr Trump a standing ovation, as he targeted Pakistan and its Prime Minister Imran Khan, without directly naming them.

“Article 370 encouraged terrorism and separatism in Jammu and Kashmir,” he said, asserting that its nullification will allow development and prosperity in the region and end discrimination against women, scheduled castes and scheduled tribes.

Amid applause, Mr Modi said both Houses of Parliament passed this with a two-thirds majority. He also sought a standing ovation for the members of Parliament who helped in making necessary constitutional changes on Jammu and Kashmir.

In an apparent reference to Pakistan, Mr Modi said that the people who cannot even manage their own country are harbouring terrorism and supporting terrorism. “The entire world knows about this,” he added.

“Where do you find conspirators of 9/11 and 26/11 terror attacks,” Mr Modi said, referring to terror attacks in the US and Mumbai.

“The time has come for a decisive fight against those who promote and support terrorism,” he added.

He emphasized that President Trump was strongly supporting India in the battle against terrorism. The audience gave standing ovation to President Trump.

Mr Modi also underscored his government’s push for development in India, saying it is the most “discussed” word in the country as his government is “aiming high and achieving higher”.

Addressing the cheering crowd, Mr Modi said the presence of such a big gathering is not confined to arithmetic and that people are seeing new history and chemistry being made. Mr Modi described in detail his efforts towards the clean India campaign and sanitation. He also spoke about his fight against corruption and said he is taking steps to give it a farewell.

“Energy of NRG (stadium) is a witness of synergy between India and the US... My answer to ‘Howdy, Modi’ is only this: Everything is Fine in India,” he said and repeated this in various Indian languages.

Referring to the recently-concluded elections, Mr Modi said that 610 million voters participated in the general elections – twice the size of the American population.

“Indians are known for patience, but now we are impatient for the development of India in the 21st century,” he said.

“New India is the resolve of the people of India. We are working tirelessly to achieve the dream of our New India. For this we are competing with ourselves, but not with anyone,” the PM said.

“We are challenging ourselves,” he said, adding that India today is challenging the mindset that nothing will change ever.

“We are aiming high. We are achieving higher,” he added.

In his remarks, Mr Modi referred to the recent decisions of his government to liberalise and reform the economy, including reduction in corporate taxes. This will make Indian companies competitive, he said.

Mr Modi said that he expects positive results from his talks with President Trump in the next few days.

“He (Trump) calls me a tough negotiator. But he is an expert in the art of the deal. I am learning a lot from him,” Mr Modi said. He invited Mr Trump to visit India with family. After Mr Modi’s speech, the two leaders clasped hands and walked together in the packed stadium, sending a message of unity between the two strategic partners.

Earlier, Prime Minister Modi introduced President Trump to the Indian-Americans at the mega-event as a very “special person” whose presence at the event signals India has a true friend at the White House.

“From CEO to Commander-in-Chief, from boardrooms to the Oval Office, from studios to the global stage, from politics to the economy and to security, he has left a deep and lasting impact everywhere,” Mr Modi said with Mr Trump standing alongside him.

Mr Modi said he met Trump a few times and every time he has been warm, friendly, accessibly, energetic and full of wit.

“And I can say I had a chance to meet him often and every time I found the friendliness, the warmth and the energy,” he said. “We in India have connected well to him,” he said, adding “Abki baar Trump Sarkar”.

Addressing the gathering, President Trump vowed to protect innocent civilians from the threat of radical Islamic terrorism and said border security was vital to both America and India as he emphasised on bolstering further the Indo-US security relationship.

“We are committed to protect innocent civilians from the threat of radical Islamic terrorism,” he said.