World   Americas  23 Aug 2017  Bodies of some 10 missing US sailers found after collision off Singapore
World, Americas

US Rep. Rodney Davis said he was informed by Logan Palmer's family that the central Illinois man is missing. 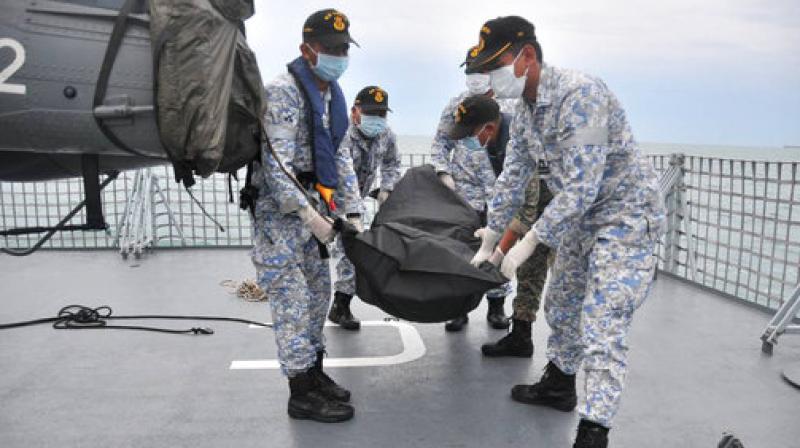 Navy sailors carry an unidentified body on to the deck of KD Lekiu frigate after it was recovered in the waters off the Johor coast of Malaysia. (Photo: AP)

Detroit: Sailors with ties to Michigan, Illinois and Ohio are among 10 who are missing after a US warship collided with an oil tanker in Southeast Asia.

US Rep. Rodney Davis said he was informed by Logan Palmer's family that the central Illinois man is missing. In Michigan, April Brandon said the military informed her that her son, Ken Smith, is also missing.

The family of Jacob Drake, 21, was told that the western Ohio man was among the missing, the Columbus Dispatched reported Tuesday.

The USS John McCain collided with an oil tanker off Singapore on Monday. Adm. Scott Swift said some bodies have been found in a flooded compartment of the warship. No other details have been released.

Brandon said Smith's father, stepmother and grandfather served in the Navy. She said Smith, 22, grew up in Novi, Michigan, and moved to Norfolk, Virginia, as a teen with his father. "His father and I couldn't be prouder of our son," Brandon said. "He's a great kid. He's a hero."

Davis, a Republican whose district includes the Decatur area, said Palmer comes from a "patriotic family." He enlisted in 2016. "Our military must do whatever necessary to minimize incidents like this and protect those who risk their lives each day in service to our country," Davis said.

Drake is engaged to be married next year. His 20-year-old fiancee, Megan Partlow, said she last heard from him on Sunday via text message. Partlow said she wants "him to be safe."