Sources say Beijing is considering shutting the US consulate in Wuhan, while Trump implies other Chinese missions in US could be closed too 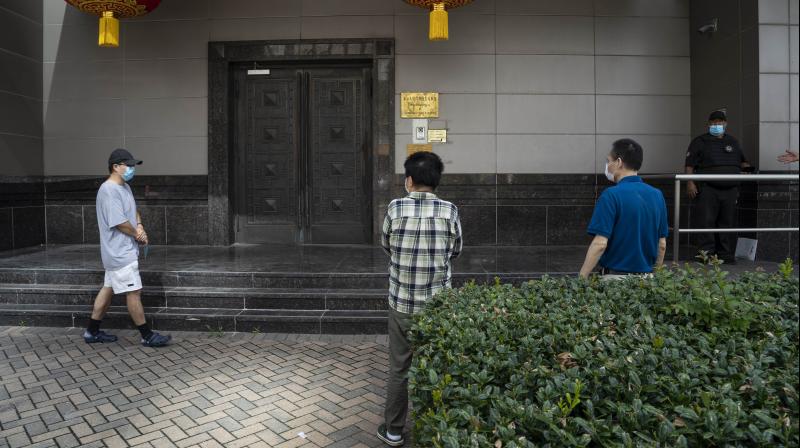 People walk around the Chinese consulate building in Houston while trying to gain access after the US ordered China to close its doors on July 22, 2020. According to the State Department, the Chinese consulate was ordered to close "in order to protect American intellectual property and Americans' private information." (AFP)

Washington: The United States gave China 72 hours to close its consulate in Houston amid accusations of spying, marking a dramatic deterioration in relations between the world’s two biggest economies.

The U.S. State Department said on Wednesday the Chinese mission in Houston was being closed “to protect American intellectual property and Americans’ private information.”

President Donald Trump said in answer to a question at a news briefing it was “always possible” other Chinese missions could be closed too.

“We thought there was a fire in one that we did close,” Trump said. “I guess they were burning documents, or burning papers, and I wonder what that’s all about.”

Overnight in Houston, firefighters went to the consulate after smoke was seen. Two U.S. government officials said they had information that documents were being burned there.

The ministry said Washington had abruptly issued the demand to close the consulate on Tuesday and called it an “unprecedented escalation.”

The Chinese Embassy in Washington had received “bomb and death threats” because of “smears & hatred” fanned by the U.S. government, spokeswoman Hua Chunying wrote in a tweet.

“The U.S. should revoke its erroneous decision,” she said. “China will surely react with firm countermeasures.”

Communist Party rulers in Beijing were considering shutting the U.S. consulate in the central city of Wuhan in retaliation, a source with knowledge of the matter said.

Richard Grenell, who served until recently as acting director of U.S. national intelligence, suggested the United States could close the Chinese consulate in tech-heavy San Francisco.

“It’s a close call. I would have done both (Houston and San Francisco) but it also makes sense to start with one,” he told Reuters by text.

The Houston move comes in the run-up to the November U.S. presidential election, in which Trump and his Democratic rival, Joe Biden, have both tried to look tough towards China.

Speaking on a visit to Denmark, U.S. Secretary of State Mike Pompeo repeated accusations about Chinese theft of U.S. and European intellectual property, which he said were costing “hundreds of thousands of jobs.”

While offering no specifics about the Houston consulate, Pompeo referred to a U.S. Justice Department indictment on Tuesday of two Chinese nationals over what it called a decade-long cyber espionage campaign that targeted defense contractors, COVID-19 researchers and hundreds of other victims worldwide.

Pompeo also referred to recent speeches by the head of the FBI and others that highlighted Chinese espionage activities.

“President Trump has said: ‘Enough. We are not going to allow this to continue to happen,’” he told reporters.

Republican Senator Marco Rubio, acting chairman of the Senate Intelligence Committee, described the Houston consulate on Twitter as the “central node of the Communist Party’s vast network of spies & influence operations in the United States.”

The New York Times quoted the top U.S. diplomat for East Asia, David Stilwell, as saying that the Houston consulate had been at the “epicenter” of the Chinese army’s efforts to advance its warfare advantages by sending students to U.S. universities.

“We took a practical step to prevent them from doing that,” Stilwell told the Times.

Stephen Biegun, the State Department’s number two diplomat, told the U.S. Senate Foreign Relations Committee the decision was made in response to “longstanding areas of concern.”

He said these included intellectual property theft and commercial espionage, as well as unequal treatment of U.S. diplomats, exporters, investors and media in China and abuse by China’s security services of the welcoming U.S. posture toward Chinese students and researchers.

A Chinese diplomat, speaking to Reuters on condition of anonymity, denied the spying allegations and said the Houston mission acted like other Chinese consulates in the United States - issuing visas, and promoting visits and businesses.

‘RACE TO THE BOTTOM’

U.S.-China ties have worsened sharply this year over issues ranging from the coronavirus and telecoms-gear maker Huawei to China’s territorial claims in the South China Sea and clampdown on Hong Kong.

Jonathan Pollack, an East Asia expert with the Brookings Institution, said he could not think of anything “remotely equivalent” to the move against the Houston consulate since the U.S. and China opened full diplomatic relations in 1979.

“The Trump Administration appears to view this latest action as political ammunition in the presidential campaign... It’s part of the administration’s race to the bottom against China,” he said.

A source with direct knowledge of the matter said China was considering closing the U.S. consulate in Wuhan, where the State Department withdrew staff and their families early this year due to the coronavirus outbreak that first emerged in the city.

China’s foreign ministry did not immediately respond to a request for comment on whether it would shut the consulate.

Wang said the U.S. government had been harassing Chinese diplomats and consular staff for some time and intimidating Chinese students. He said the United States had interfered with China’s diplomatic missions, including intercepting diplomatic pouches. The State Department did not respond to a request for comment on the Chinese accusations.