The gunman shot at 14 people, killing one of them, before being killed after an exchange of gunfire with police. 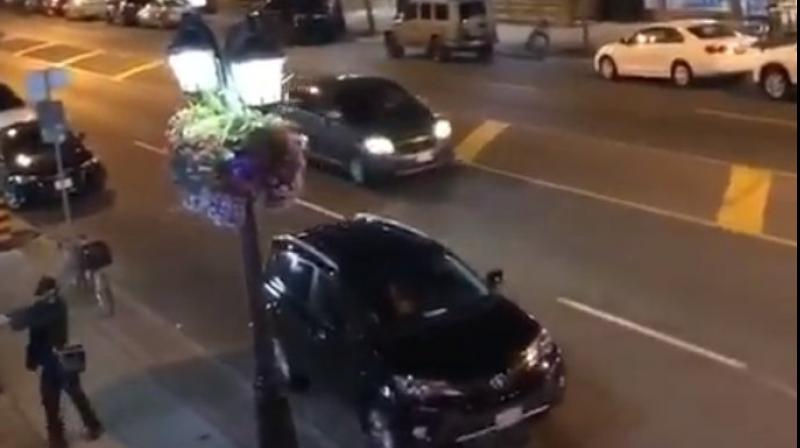 The video from a witness shows the man dressed in black clothes and a black hat walking quickly and firing three shots from the sidewalk into at least one shop or restaurant. (Photo: Video screengrab | Twitter/@TheAPJournalist)

Toronto: A video circulating online purportedly shows the Toronto shooter firing a handgun into restaurants and cafes as he walks along a Toronto street.

The gunman shot at 14 people, killing one of them, before being killed after an exchange of gunfire with police late Sunday, police said.

The video from a witness shows the man dressed in black clothes and a black hat walking quickly and firing three shots from the sidewalk into at least one shop or restaurant. Toronto’s Greektown is a lively residential area with crowded Greek restaurants and cafes.

Video purporting to show the Toronto gunman opening fire is making its way around Twitter. https://t.co/137yGuZpwy

Here's a screengrab (gunman is in the bottom left) pic.twitter.com/SsUobUgqyN

Police chief Mark Saunders said the shooting in the city’s Greektown neighbourhood was not random and he did not rule out terrorism as a motive.

“Other than the shooter, we have a young lady that is deceased,” the police chief said.

Saunders also said a 9-year-old was in critical condition.

The condition of the other victims was not known yet, police spokesperson Mark Pugash said.

Witnesses heard many shots and described the suspect walking past restaurants and cafes and patios on both sides of the street and firing into them.

John Tulloch said he and his brother had just gotten out of their car when he heard about 20 to 30 gunshots.

“We just ran. We saw people starting to run so we just ran,” he said.

Police have urged people to come forward with video or witness testimony.

The mass shooting comes a few months after a driver of a van plowed into pedestrians on a Toronto sidewalk, killing 10 people and injuring 14. Authorities have not disclosed a motive. But they have said the arrested driver, Alek Minassian, posted a message on social media referencing a misogynistic online community before the attack.