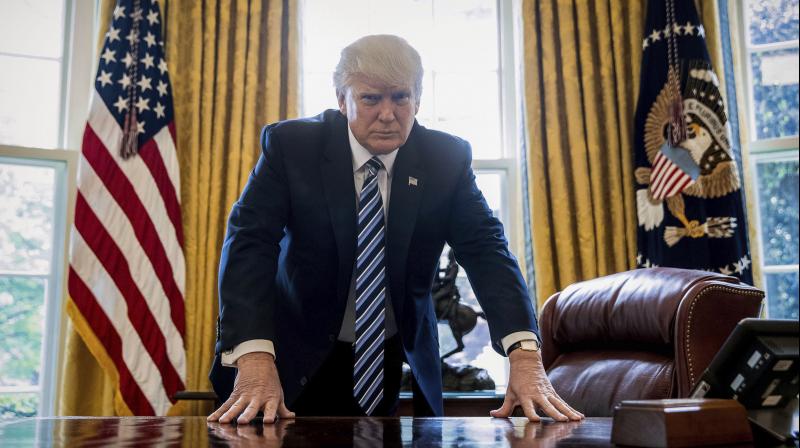 The official said H-1B visas presently were awarded through random lottery with about 80 per cent of H-1B workers being paid less than the median wage in their fields. (Photo: AP)

Washington: The US has accused top Indian IT firms TCS and Infosys of unfairly cornering the lion's share of H-1B visas by putting extra tickets in the lottery system, which the Trump administration wants to replace with a more merit-based immigration policy.

At a White House briefing last week, an official in the Trump administration said a small number of giant outsourcing firms flood the system with applications which naturally ups their chances of success in the lottery draw.

"You may know their names well, but like the top recipients of the H-1B visa are companies like Tata, Infosys, Cognizant -- they will apply for a very large number of visas, more than they get, by putting extra tickets in the lottery raffle, if you will, and then they'll get the lion's share of visas," the senior official said, according to transcript of the briefing posted on White House website.

Responding to a follow up on why Indian companies were singled out for a mention, the White House response said Tata Consultancy Services, Infosys and Cognizant were the top three recipients of H-1B visas.

"And those three companies are companies that have an average wage for H-1B visas between USD 60,000 and USD 65,000 (a year). By contrast, the median Silicon Valley software engineer's wage is probably around USD 150,000," the official said.

He said contracting firms that are not skills employers, who oftentimes use workers for entry-level positions, capture the lion's share of H-1B visas. "And that's all public record."

The official said H-1B visas presently were awarded through random lottery with about 80 per cent of H-1B workers being paid less than the median wage in their fields.

He said workers are often brought in well below market rates to replace American workers, again, sort of violating the principle of the programme, which is supposed to be a means for bringing in skilled labour.

"Instead you're bringing in a lot of times workers who are actually less skilled and lower paid than the workers that they're replacing," he said.

So if the current system that awards visas randomly without regard for skill or wage is changed to a skills-based awarding, it would make it extremely difficult to use the visa to replace or undercut American workers, he said.

"Because you're not bringing in workers at beneath the market wage. And so it's a very elegant way of solving very systemic problems in the H-1B guest worker visa," he said.