World   Americas  23 Jan 2019  Indian couple who fell to their deaths from cliff in US were intoxicated
World, Americas

An Indian couple, who fell to their deaths in October were intoxicated at the time of the fall. 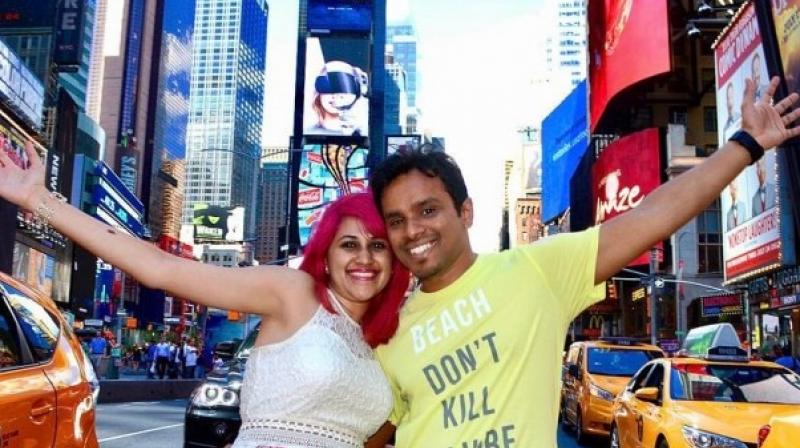 Vishnu Viswanath, 29, and his wife, Meenakshi Moorthy, 30, were "intoxicated with ethyl alcohol" prior to falling. (Photo:Instagram)

New York: An Indian couple, who fell to their deaths in October reportedly while taking a selfie at a steep cliff in California's Yosemite National Park, were intoxicated at the time of the tragic fall, according to an autopsy report.

Vishnu Viswanath, 29, and his wife, Meenakshi Moorthy, 30, were "intoxicated with ethyl alcohol" prior to falling 800 feet from Taft Point on October 25, but no drugs were present in their bodies, according to the autopsy report.

Ethyl alcohol is found in alcoholic beverages such as beer, wine and hard liquor. Due to the condition of the bodies after the extreme fall, investigators were unable to accurately discern a specific level of intoxication, Andrea Stewart, assistant Mariposa County coroner said.

"All we can conclude is that they had been drinking and that they had alcohol in their systems. We don't know how much," Stewart was quoted as saying by Mercury News. The couple from Kerala died "of multiple injuries to the head, neck, chest and abdomen, sustained by a fall from a mountain,” the report said.

The couple had been married since 2014. Both graduated in 2010 from the College of Engineering, Chengannur, in Kerala. Viswanath was a software engineer with Cisco India at the company's headquarters in Silicon Valley.

Moorthy and Viswanath — who showcased their adventure-seeking travels on Instagram — had set up a tripod at Taft Point before they fell 800 feet down the side of a steep cliff. The tripod was later discovered on the edge of the overlook.

Just months before her tragic death, Moorthy had warned in an Instagram post the dangers of taking photographs on the edge of cliffs and atop skyscrapers. She posted a picture of herself at the Grand Canyon, saying in the caption that “A lot of us including yours truly is a fan of daredevilry attempts of standing at the edge of cliffs. But did you know that wind gusts can be fatal? Is our life worth one photo?”

In an eerie coincidence, Moorthy appears in the selfie of another tourist couple at Taft Point, just minutes before she plummeted to her death.