World   Americas  22 Nov 2017  Brazil may ban all abortions even in cases of rape victims, danger to mother's life
World, Americas

Brazil may ban all abortions even in cases of rape victims, danger to mother's life

Abortion is illegal in Brazil, home to the world's largest Catholic community, except when pregnancy is due to rape. 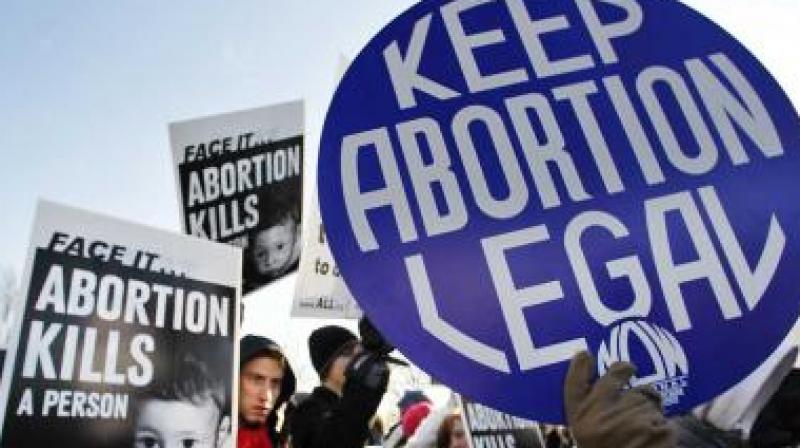 Thousands of women took to Brazil's streets early November to protest against the bill, which is supported by increasingly influential evangelical Christian groups. (Photo: File/ AP/Representational)

Rio de Janeiro: More pregnant women could die in Brazil if it passes a law banning all abortions on Tuesday, including in cases of rape or when the mother's life is in danger, critics said.

Thousands of women took to Brazil's streets early November to protest against the bill, which is supported by increasingly influential evangelical Christian groups.

"It's intentional fraud from fundamentalist congressmen who think that their religious dogmas have greater weight than the democratic state," said congresswoman Erika Kokay, who opposes the constitutional reform bill.

"It's absurd and is a huge setback against legislation on women's rights in force since the 1940s," she told the Thomson Reuters Foundation.

Abortion is illegal in Brazil, home to the world's largest Catholic community, except when pregnancy is due to rape, endangers the mother's life or if the fetus has anencephaly, in which a baby is missing parts of the brain and skull.

More than 1 million abortions take place in clandestine clinics each year and thousands of women end up in hospital as a result of botched procedures, according to government estimates.

A Congressional committee, which voted by 18-1 in favour of a bill to ban abortion under all circumstances early November, is voting again on certain sections on Tuesday with the aim of securing a unanimous vote.

Kokay - the committee's only female member and the only one to oppose the bill in the earlier vote - said she and other politicians will oppose it in Brazil's top court, if necessary.

Conservative lawmakers say that life begins at conception and laws must protect the unborn child's rights at all costs.

The move to criminalise all abortions is part of a trend by a growing evangelical caucus in Brazil's Congress to roll back women's rights on social issues, campaigners say.

"We want congress to guarantee more rights, not to remove them," said Jurema Werneck, Brazil director of Amnesty International, which has launched an online campaign against the bill with about 40,000 signatures collected so far.

The bill requires two-thirds of the votes in both chambers of Congress to become law as part of a constitutional amendment.

It would then need to be approved by the Senate and signed into law by Brazil's conservative President Michel Temer.

The law could win votes as part of a trade-off for other legislation the governing coalition seeks to pass, such as pension reform to plug a gaping budget deficit, analysts said.

Deborah Duprat, a prosecutor for citizen's rights in the Office of the Attorney General, said the bill was unconstitutional and a "violent act" against women that puts their lives at risk.

"The World Health Organization states that unsafe abortion is one of the main causes of death among women that could be avoided," she said.