PM Modi had arrived at the George Bush Intercontinental airport here on Saturday for the 'Howdy, Modi' community event. 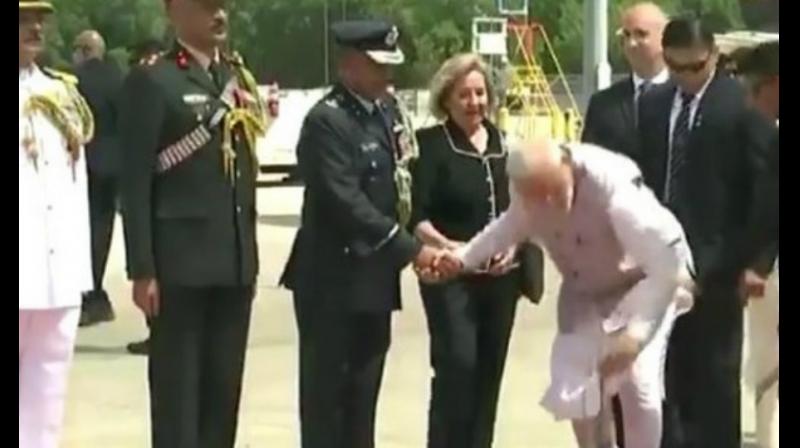 A flower fell off the bouquet and to everyone's surprise, Modi bent down and picked it up himself. (Photo: File)

Houston: Prime Minister Narendra Modi keeps an eye for cleanliness even outside India, showing to the world that he practises what he preaches.

On his arrival at the George Bush Intercontinental airport here on Saturday for the "Howdy, Modi" community event, the Prime Minister was presented with a bouquet of flowers by an American dignitary, receiving him along with U S Ambassador to India Kenneth Juster, Indian Ambassador to the U S Harsh Vardhan Shringla and other senior officials.

A flower fell off the bouquet and to everyone's surprise, Modi bent down and picked it up himself.

#WATCH United States: PM Narendra Modi arrives in Houston, Texas. He has been received by Director, Trade and International Affairs, Christopher Olson and other officials. US Ambassador to India Kenneth Juster and Indian Ambassador to the US Harsh Vardhan Shringla also present. pic.twitter.com/3CqvtHkXlk

A user wrote: "All the best @narendramodi. If notice carefully, he picked up the flower fallen from the bouquet of flowers. Shows his attention towards the smallest things. Simplicity of great leader."

Another one said: "Where PM Narendra Modi spontaneously picks up a flower or a stem, which had fallen on the ground from a bouquet presented to him, and hands it over to his security staff. Simplicity!"

"Was that a belief of not crushing part of plant with feet or was it a gesture towards Swachhta Abhiyan?," said a Twitter user.

The Prime Minister will be awarded the "Global Goalkeepers Award" at the Lincoln Centre by the Bill and Melinda Gates Foundation for leadership in the field of sanitation through the "Swachh Bharat Abhiyan".

He will be recognised for "the progress India is making in improving sanitation, as part of its drive toward achievement of the U N sustainable development goals", according to the Gates Foundation, which has pointed out that globally, sanitation-related diseases kill nearly five lakh children annually.

Over 10 crore toilets have been built in India since the launch of the Swachh Bharat programme on October 2, 2014.

"The Swachh Bharat Mission can serve as a model for other countries around the world that urgently need to improve access to sanitation for the world's poorest," a source said.