Memorials cropped up all over the province of fewer than a million people, featuring Canadian flags and flowers 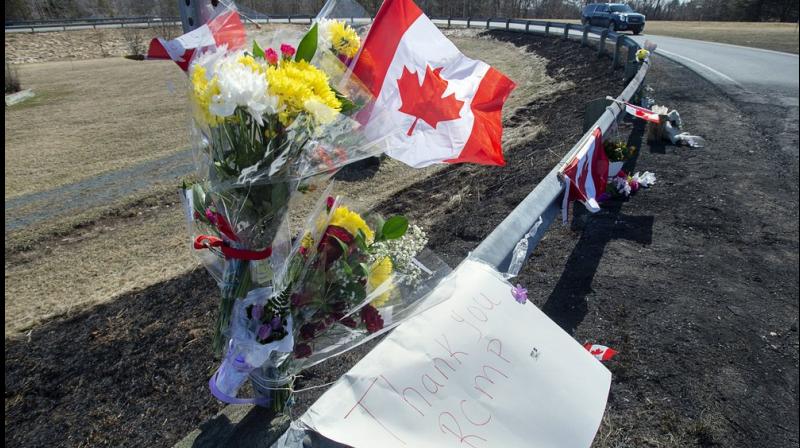 A memorial pays tribute to Royal Canadian Mounted Police Constable Heidi Stevenson, a mother of two and a 23-year veteran of the force, along the highway in Shubenacadie, Nova Scotia. (AP Photo)

Canada: Canadian police had yet to determine a motive for the country’s worst mass shooting, as the death toll from the carnage in Nova Scotia over the weekend climbed to 23 from 19, the Royal Canadian Mounted Police (RCMP) said on Tuesday.

The shooting rampage has rattled rural communities in the Atlantic province, as investigators seek answers to questions such as how the gunman obtained an authentic police uniform and secured a police look-alike cruiser, both of which aided his easy movement during his 13-hour spree.

Memorials cropped up all over the province of fewer than a million people, featuring Canadian flags, flowers and illustrations of broken hearts. The Canadian Broadcasting Corp said the death toll included the suspect.

The RCMP said in a statement it was investigating the 16 crime scenes that were part of the murder spree, several of which included burnt-out homes. Police said there were also injuries in the attack, but did not say whether the death toll would rise further.

The gunman, 51-year-old Gabriel Wortman, who worked as a denturist, began his rampage late on Saturday. He was fatally shot by police at noon on Sunday at a service station.

The youngest among those confirmed killed so far was a 17-year-old, the RCMP said. Some of the victims were known to the gunman but others were not. A veteran police officer, a teacher and a nurse were among the dead.