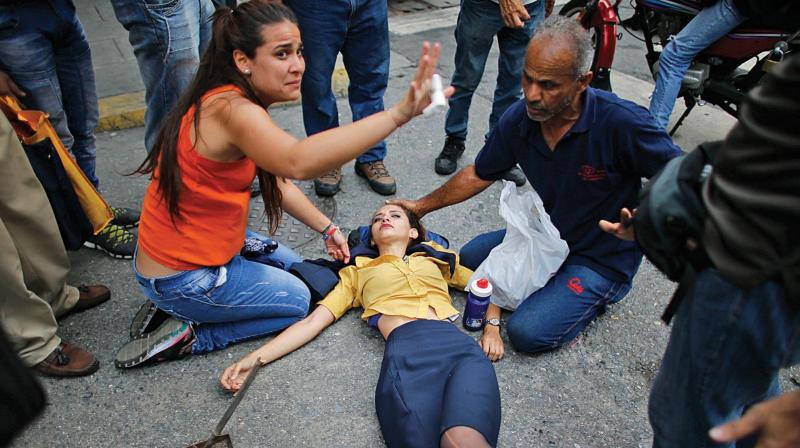 People try to revive a woman who fell unconscious due to inhaling tear gas during an anti-government protest in Caracas, Venezuela. (Photo: AP)

Caracas: A man was fatally shot on Thursday night during a protest in the Venezuelan capital Caracas, an official said, as deadly unrest continued to roil the oil-rich nation.

“We demand that the culprits be investigated and punished!” added Mr Ocariz, who opposes the government of President Nicolas Maduro.

Mr Ocariz did not elaborate on the details of the shooting: whether Guaitan was taking part in an opposition march or was perhaps just passing by, and whether the shooter was a civilian or a law enforcement officer.

Amid the chaos, 54 children were evacuated from a hospital in Petare. No details were available.

Eight other people have died in the last three weeks during anti-Maduro protests, which have virtually always ended in clashes between demonstrators and the authorities.

Unrest was reported on Thursday in several parts of Caracas, most seriously in the working-class neighbourhood of El Valle.

Mr Maduro said the protests seeking to oust him are backed by the US.

One protester, completely naked except for sneakers, walked up to police and shouted: “Please, stop gas-bombing us.”