Britain has congratulated Dalveer Bhandari and said it will continue to cooperate closely with India at the UN and globally. 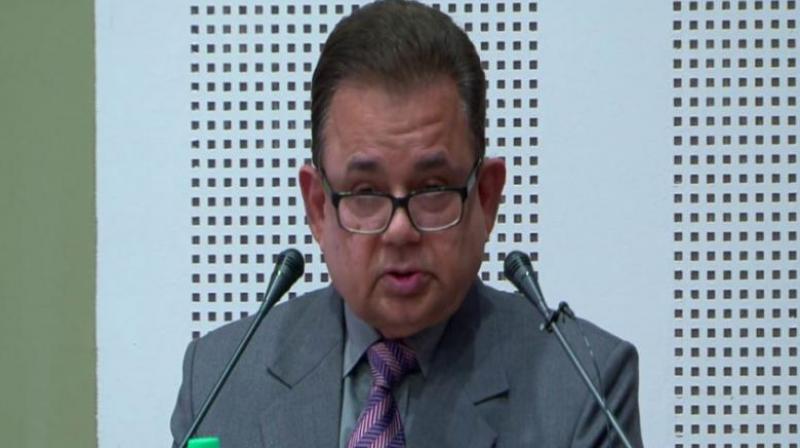 India's nominee to the International Court of Justice Dalveer Bhandari was re-elected to the last seat of the world court on Monday after Britain withdrew its candidate from the election. (Photo: Youtube | Screengrab)

United Nations: India's nominee to the International Court of Justice (ICJ) Dalveer Bhandari was re-elected to the last seat of the world court on Monday after Britain withdrew its candidate from the election.

Bhandari received 183-193 votes in the General Assembly and secured all the 15 votes in the Security Council after separate and simultaneous elections were held at the UN headquarters in New York.

The elections were held after United Kingdom, in a dramatic turn of events, withdrew out of the race for the Hague-based ICJ, thus paving the way for Bhandari's re-election to the prestigious world court.

Bhandari and Britain's Christopher Greenwood were locked in a neck-and-neck fight for re-election to the ICJ. Both were seeking re-election for the nine-year term.

The permanent members of the Security Council - the US, Russia, France and China - were understood to have been throwing their weight behind Greenwood.

Britain is the fifth permanent member of the Security Council.

Britain has congratulated Justice Dalveer Bhandari on being re-elected to the ICJ and said it will continue to cooperate closely with India at the United Nations and globally.

Britain's Permanent Representative to the United Nations Matthew Rycroft, in a statement said it decided to withdraw Sir Chris Greenwood as a candidate for re-election as a Judge of the International Court of Justice.

"The UK has concluded that it is wrong to continue to take up the valuable time of the Security Council and the UN General Assembly with further rounds of elections," he said.

Britain, he said, congratulates the successful candidates, including Judge Bhandari of India.

"We are naturally disappointed, but it was a competitive field with six strong candidates," Rycroft said.

"If the UK could not win in this run-off, then we are pleased that it is a close friend like India that has done so instead. We will continue to cooperate closely with India, here in the United Nations and globally," he said.

Rycroft said that the UK will continue to support the work of the ICJ, "in line with our commitment to the importance of the rule of law in the UN system and in the international community more generally".

Britain's withdrawal from the election to the prestigious world court would mean that there will not be a British judge on the UN's most powerful court for the first time in its history.

In a dramatic turn of events, the British Permanent Representative to the UN, Matthew Rycroft, wrote identical letters to the presidents of the United Nations General Assembly and the Security Council, before the two chambers were scheduled to meet at 3 pm (local time) for the 12th round of voting.

India has been seeking that the democratic process need to be played its full course in both the Security Council and the General Assembly and there should not be an intervention or adoption of a process that has never been used before or the one that undermines the voice of the majority.