World   Americas  21 Aug 2020  US moves to restore all UN sanctions on Iran in dispute over nuclear deal
World, Americas 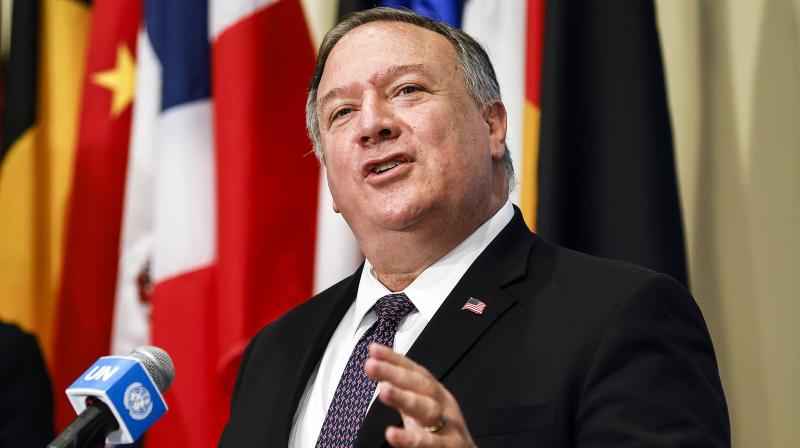 Secretary of State Mike Pompeo speaks to reporters following a meeting with members of the U.N. Security Council. (AP)

United Nations: The United States moved on Thursday to restore U.N. sanctions on Iran, including an arms embargo, arguing Tehran was in violation of a nuclear deal it struck with world powers in 2015 even though Washington itself abandoned that agreement two years ago.

The United States submitted a letter to the 15-member U.N. Security Council accusing Tehran of non-compliance, starting a 30-day clock that could lead to a “snapback” of U.N. sanctions.

All the remaining parties to the nuclear deal - Germany, France, Britain, Russia and China - immediately notified the Security Council, in letters seen by Reuters, that they did not recognise the U.S. move.

The United States acted after the Security Council resoundingly rejected its bid last week to extend an arms embargo on Iran beyond its expiration in October.

“It is an enormous mistake not to extend this arms embargo. It’s nuts!” Pompeo told reporters at the United Nations as he harshly criticized what he described as the “one-sided, foolish” nuclear deal negotiated by former U.S. President Barack Obama.

President Donald Trump has called it the “worst deal ever.” The pact aimed to prevent Tehran from developing nuclear weapons in return for sanctions relief and is enshrined in a 2015 Security Council resolution. Washington argues that it can trigger the snapback process because the resolution still names it as a participant to the nuclear deal.

Germany, France and Britain on Thursday described the U.S. attempt to trigger a sanctions snapback as “incompatible” with their efforts to support the already fragile nuclear deal, while Russia and China said it was “illegitimate.”

China’s U.N. Ambassador Zhang Jun asked Indonesia, council president of August, “not to identify and circulate the U.S. communication as a notification” to trigger the snapback process and to consult with all council members on how to proceed.

Earlier on Thursday Russia’s U.N. Ambassador Vassily Nebenzia rejected the U.S. plan as “nonexistent.” Russia called for the council to meet on Iran on Friday but diplomats said that Washington blocked the request.

Along with an arms embargo, a snapback of U.N. sanctions would include a ban on Iran developing ballistic missiles capable of delivering nuclear weapons and a halt to Iran’s nuclear enrichment-related and reprocessing activities. Countries also would be urged to inspect shipments to and from Iran and authorized to seize any banned cargo.

“A permanent member of the Security Council is acting like a child, is being ridiculed by the other members of the international community,” he told reporters after Pompeo spoke.

Three senior Iranian officials told Reuters this week Iran’s leadership is determined to remain committed to the nuclear deal, hoping that a victory by Trump rival Democrat Joe Biden in the Nov. 3 U.S. presidential election will salvage the pact.

Biden, who was Obama’s vice president, said he would rejoin the deal if Iran first resumed compliance.

“If Iran returns to strict compliance with the nuclear deal, the United States would rejoin the agreement and build on it, while working with allies to push back on Iran’s destabilizing actions,” Biden campaign spokesman Andrew Bates told Reuters.

In response to what the Trump administration calls its “maximum pressure” campaign of unilateral sanctions - a bid to get Iran to negotiate a new deal - Tehran has breached central limits of the 2015 pact, including on its stock of enriched uranium.

In his letter to the U.N. Security Council, Pompeo referenced those violations but did not mention that the United States quit the deal in 2018.

Given questions over the U.S. move on Thursday, diplomats said Russia, China and other countries are unlikely to reimpose the sanctions on Iran. Pompeo warned Russia and China against that on Wednesday, threatening U.S. sanctions if they refuse to reimpose the U.N. measures on Iran.