Cardinal Law, forced to step down over sex-scandal, passes away

Law promoted Shanley, who had admitted to sodomizing boys and vocally advocated sex between adults and children. 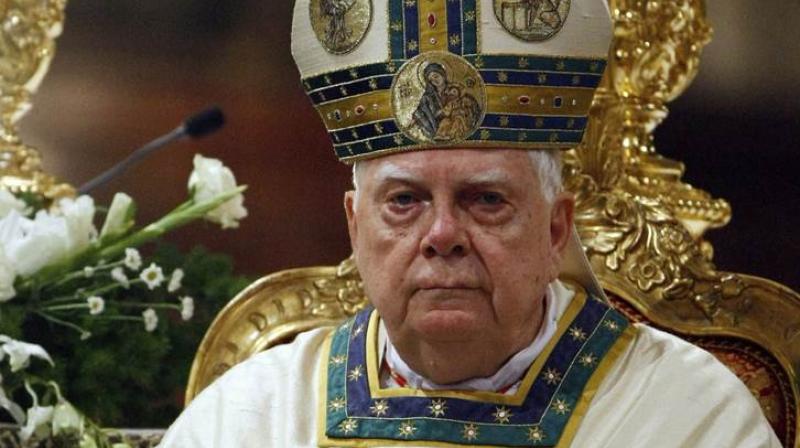 Law stepped down, having become a central figure in the worst crisis to hit the Roman Catholic Church in America — the alleged cover-up by church officials of sexual abuse of children by priests. (Photo: AP)

Cardinal Bernard Law, who was forced to resign in 2002 as archbishop of Boston over a sex-abuse scandal after a two-decade reign as one of the highest-ranking Catholic officials in the United States, has died, news media said.

He was 86. Details of his death were unclear late on Monday. He lived in Rome, the New York Times said.

Law’s resignation in December 2002 amid a scandal over pedophile priests was a dismal end to an extraordinary career that started in the heat and protest of civil rights advocacy in the US deep south and eventually touched the highest rungs of church power in Rome.

It was a deep fall for Law, who had been warmly welcomed as a bishop of great promise when he arrived to take over the Boston archdiocese in 1984. The Harvard-educated orthodox theologian was tailor-made to lead the Catholic stronghold.

He was loyal to the Pope, he had administrative experience, he was familiar with Boston from his days at Harvard and as an outsider he would be able to bring objectivity and financial order to a diocese that had suffered during the school desegregation riots of the 1970s, Boston College professor and church historian Thomas O’Connor wrote in his 1998 book, “Boston Catholics”.

Law’s fluency in Spanish and wide travels in Latin America made him an ideal candidate as the diocese welcomed new immigrants who were starting to rival the established Irish-Italian population as the dominant force in the church.

“Bright, affable and compassionate, the new prelate made friends easily, moved about the archdiocese actively, displayed an early and serious concern for poor and homeless persons and almost immediately set out to establish relations with the increasing number of “new” immigrants,” O’Connor wrote.

Law sealed his place in the hearts of Boston’s rabid sports fans when he high-fived Boston Celtics’ basketball player Quinn Buckner after the team won the NBA championship in 1984.

But it all ended badly in December 2002. Law stepped down, having become a central figure in the worst crisis to hit the Roman Catholic Church in America — the alleged cover-up by church officials of sexual abuse of children by priests.

Many Catholics in the Boston area, as well as throughout the United States, where similar scandals played out, seethed at reports and internal church files that showed leaders such as Law knew about the abuse and kept it secret.

Law’s departure followed revelations that he knew of the sexual abuse tendencies of a priest, Father Paul Shanley, for years, but did nothing to stop him from interacting with children.

Instead, Law promoted Shanley, who had admitted to sodomizing boys and vocally advocated sex between adults and children, and even recommended him in his transfer to a California parish.

But while the Shanley case was the last straw, it appeared to be just one of several instances in which Law and others in the archdiocesan hierarchy hid abuse of children by priests.

The scandal started with the case of John Geoghan, a defrocked priest accused by more than 130 people of molesting them during his 30 years as a Boston area priest. He is now serving a prison sentence for molesting a 10-year-old boy.

The Boston archdiocese has settled dozens of cases against Geoghan for at least $45 million. After documents revealed the extent of the cover-up of Geoghan’s sexual problems, Law caved in to public pressure and handed over to police the names of nearly 100 priests who had been accused.

Law, a conservative theologian known for a disdain of the media and his closeness to the pope, repeatedly apologized to Geoghan’s victims, but in the aftermath of the Shanley revelations, went into seclusion and refused interview requests.

“In my most horrible nightmares, I would never have imagined we would have come to the situation we are in today,” Law told a meeting of about 3,000 Catholics.

“I stand before you recognizing the trust many of you had in me has been broken, and it has been broken because of decisions for which I was responsible.

“With all my heart, I am sorry for that,” he said.

The public contrition was a far cry from the way Law handled the case of former priest John Porter, who admitted sexual abuse of children.

As evidence emerged in 1991 and 1992 that Porter molested dozens of children in the Fall River, Massachusetts diocese, Law lashed out at the media, sounding as though he blamed it for the scandal.

“The papers like to focus on the faults of a few,” Law said in May 1992. “We deplore that. . . . By all means we call down God’s power on the media, particularly the Boston Globe.”

Law was also known for strict adherence to the letter of church law and his unbending ways looked hypocritical to some, in light of extensive efforts to hide abuse by his priests.

“And you Bernard, my cardinal, my prince of the church, my shepherd, my father in Christ, how long have I hungered at your indifferent door for a crumb of compassion, justice, or mercy? Or even a crumb of simple honesty?”

The open hostility to Law marked a sharp reversal from the popularity of his early days as a priest and prelate.

Law was ordained in 1961 and promptly dropped into the racial tension and danger of Mississippi at a time when civil rights workers were sometimes killed for their actions.

As editor of the diocesan newspaper, he established himself as something of a firebrand, raising money to rebuild burned churches, building an interracial Committee for Concern and using the paper to call for an end to segregation.

His bold work was also risky – his name was found on a hit list circulated by Mississippi segregationists – but it also put him on a short list for leadership posts in the Church.

After Mississippi, he went to Washington D C, where he held an administrative post for three years. From there, in 1973, he was appointed bishop of Springfield-Cape Girardeau, Missouri. In 1984, he was promoted to Archbishop of Boston and was elevated to Cardinal in 1985.

He attended schools in north and south America and graduated from Harvard College in 1953. He enrolled in St. Joseph Seminary in St. Benedict, Louisiana and then attended Pontifical College Josephinum at Worthington, Ohio.