Michelle looks forward to some anonymity, won’t run for President

Her mother, who stayed with them in the White House for eight years, has headed back to Chicago. 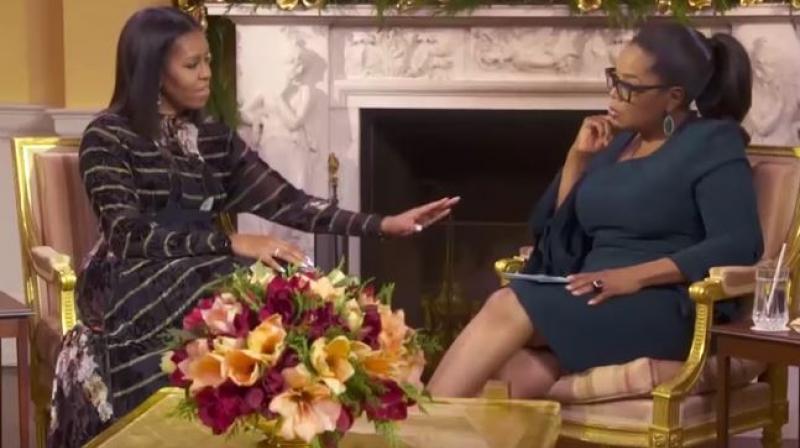 Barack did a cameo proving how close he is with his wife and praised Michelle’s legacy as the first lady. (Photo: YouTube Screengrab)

Washington: The First Lady Michelle Obama bid goodbye to the White House in her interview with chat show icon Oprah Winfrey, which was aired on Monday night on CBS.

According to a report in Daily Mail, Michelle Obama in her interview with Oprah said she would help her successor Melania Trump once she settles in her new role. She said her door would remain open if the new First Lady had any questions, the same courtesy her predecessor, Laura Bush, extended to Michelle eight years ago when she became the new First Lady.

She discussed how these eight years of presidency had brought her and her husband closer. She moved into White House thinking the experience would either make or break her daughters who were seven and ten at the time.

When asked whether she would run for the office, Michelle’s said she didn’t want Sasha, 15, and Malia, 18, her daughters, to spend 16 years of their life with a parent as president. 'I wouldn't do that to my kids,' she said.

'I don't make stuff up. I'm not coy. I've proven that. I'm pretty direct. If I were interested in it, I'd say it. I don't believe in playing games. It's not something I would do,' she added. She even cleared that the Democratic Party hadn’t asked her to run for any office and that she wasn’t having any discussion about this matter.

Talking about Melania’s visit to the White House in November, Michelle said she didn’t offer any advice because it was too early then and Melania probably didn’t know what kind of questions to ask yet.

'You really don't know what you don't know until you're here,' Michelle said. 'So I - the door is open, as I've told her, and as Laura Bush told me, you know, and as other First Ladies told me', she said.

When asked about the 2016 US Presidential elections which witnessed Donald Trump’s shocking victory against Hillary Clinton, she didn’t hold back her feelings and said it was ‘painful’.

'This past election was challenging for me as a citizen. To watch and experience. It was painful,' Michelle said.

Both Barack and Michelle were seen extending their strong support to Hillary during the election campaign.

She said she went to bed early on Election Night feeling she knew what the results would be. Her thoughts were confirmed the next morning when she checked her phone.

Barack did a cameo proving how close he is with his wife and praised Michelle’s legacy as the first lady.

'We all knew she was brilliant and cute. And strong and a great mom. But I think the way in which she blended purpose and policy with fun so that she was able to reach beyond Washington on her health care initiatives, on her military family work, was masterful,' he said.

Michelle also said that she looked forward to regain some anonymity. Her mother, who stayed with them in the White House for eight years, has headed back to Chicago.

Oprah ended the interview by asking Michelle what her prayer for the country was. 'My desire for this country is that we remain hopeful and that -- and that we find a place in our hearts to love each other. It's really simple, you know? Just opening up our hearts to others. Making room', she said.