On a foggy and rainy evening on Wednesday, yoga postures were projected on the North Facade of the UN Headquarters Building. 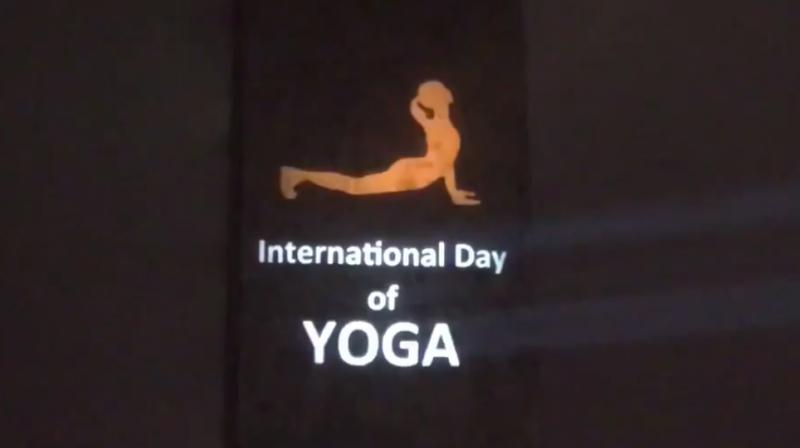 The United Nations headquarters was lit up with postures of 'Surya Namaskar' and the message of 'Yoga for Climate Action' as India's Permanent Mission to the UN kick-started its celebrations for the 5th International Day of Yoga. (Photo: Twitter)

United Nations: The United Nations headquarters was lit up with postures of 'Surya Namaskar' and the message of 'Yoga for Climate Action' as India's Permanent Mission to the UN kick-started its celebrations for the 5th International Day of Yoga.

The North Facade of the UN Secretariat building was awash with 'Surya Namaskar' or 'Sun Salutation' postures projected against a colourful background. The Surya Namaskar is one of the most popular and significant yoga exercises, with Prime Minister Narendra Modi also tweeting about its benefits in a special video made for the occasion of the Yoga Day this year.

Yoga is beneficial to every one ! Let all become wise to live rightly fit and stress free for having good intentions&doing good actions to live in peace!#Yoga lights up at UN Headquarters in the lead up to the 5th #InternationalDayofYoga at United Nations pic.twitter.com/Fr94hrTH59

"Have you made Surya Namaskar a part of your routine? Do watch this video to know why it is a good idea to do so and the advantages that come with regularly practising it. #YogaDay2019," Modi said in a tweet.

The Indian mission will organise several events over the course of the next two-days to mark the 5th International Yoga Day on June 21. 'Yoga with the Gurus' will be held Thursday evening on the sprawling North Lawn in the United Nations Headquarters and Deputy Secretary-General Amina Mohammed will be Chief Guest at the event.

The outdoor event will have a session led by Yoga gurus Swami Paramananda, Kevin Tobar and his associates from Bhakti Cente and Sunaina Rekhi from India. In addition, there will be musical and dance performances by "Indian Raga".