Terrorists cannot be allowed to negotiate from 'place of advantage': India tells UN

Akbaruddin said the 'sanctuaries and safe havens' provided to terror networks have to be addressed for a peace in Afghanistan. 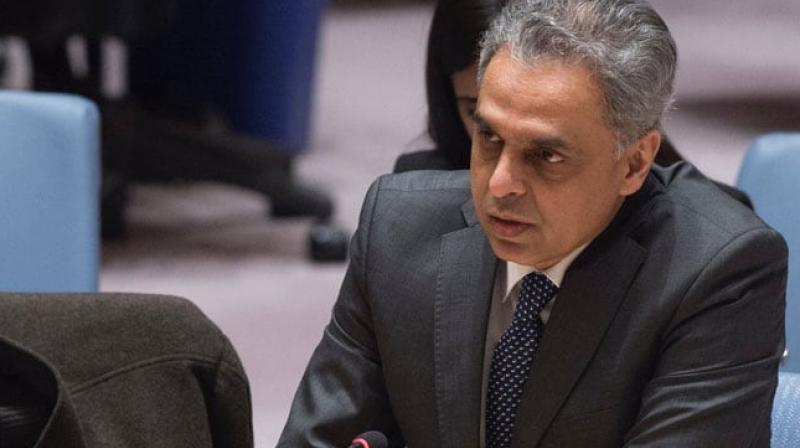 The terrorist activities of the Taliban, the Haqqani Network, ISIS as well as al-Qaeda and its proscribed affiliates the LeT and the JeM need to end, Akbaruddin said. (Photo: Tweeter)

New York: India has told the UN that terror groups enjoying "support and safe havens" to carry out terrorist activities in Afghanistan from across the borders (in Pakistan) cannot be allowed to negotiate from a "place of advantage" as the US and the Taliban are planning to meet for the next round of crucial peace talks in Qatar.

Calling for a need to end the activities of Pakistan-based terrorist groups Lashkar-e-Taiba (LeT) and Jaish-e-Mohammed (JeM), India's Permanent Representative to the UN, Ambassador Syed Akbaruddin said that the "sanctuaries and safe havens" provided to terror networks have to be addressed for a genuine and sustainable peace in Afghanistan.

"As the way forward is chalked out, we cannot ignore that groups enjoying support and safe havens carry out violent and terrorist activities from across borders. They cannot be allowed to negotiate from a place of advantage," he said during an open debate at the United Nations on the situation in Afghanistan on Wednesday.

The terrorist activities of the Taliban, the Haqqani Network, ISIS as well as al-Qaeda and its proscribed affiliates the LeT and the JeM need to end, he said.

The concluding communique of the Loya Jirga, convened by President Ashraf Ghani on April 29, called for a ceasefire, talks without pre-conditions, a Taliban office to be opened in Afghanistan, a responsible withdrawal of international forces, the formation of an inclusive negotiating team, continued support from the international community, and the preservation of human rights, particularly women's rights, Mr Akbaruddin said.

"However, we see that some may be driven by a sense of an urgency with timelines which are, perhaps, not intrinsic to the needs of the Afghan people."

"We need to be cognizant that it is the Afghan people who will have to implement and sustain these agreements," the Indian diplomat said.

By all accounts, this is a crucial year for Afghanistan, he said.

"While Afghanistan gears up to have its fourth Presidential elections later this year, all of us need to be mindful of the gains that the Afghan people have made in the last 18 years," Mr Akbaruddin said.

The dignity and sustainability of the gains made by the people of Afghanistan should be the paramount factor in determining what outcome will best suit the country and will be implementable in a sustainable and dignified manner, he said.

"Experience with the Hizb-e-Islami shows that a peace settlement within the rubric of the current Constitution is possible both politically and socially," Mr Akbaruddin added.

India supports an Afghan-led, Afghan-owned and Afghan-controlled inclusive peace and reconciliation process which promotes and protects unity, sovereignty, democracy, inclusiveness and prosperity of Afghanistan, he said.

"India has age-old historical, cultural, civilizational and economic ties with Afghanistan. We are working closely with our Afghan partners in implementing developmental projects and will continue to do so," Mr Akbaruddin added.

The US and the Taliban are planning to meet for the next round of crucial peace talks in Qatar.

Afghan-born chief American negotiator Khalilzad has held six rounds of direct talks with Taliban envoys in the Qatari capital of Doha since the process began last fall to bring an end to what has now become the longest US overseas military intervention.