Pulwama attack: Indian Americans to protest outside Chinese, Pak consulate in US

The objectives of the protest is to expose 'barbaric nature' of Pakistani terrorism and Pakistan- and China-supported terrorism. 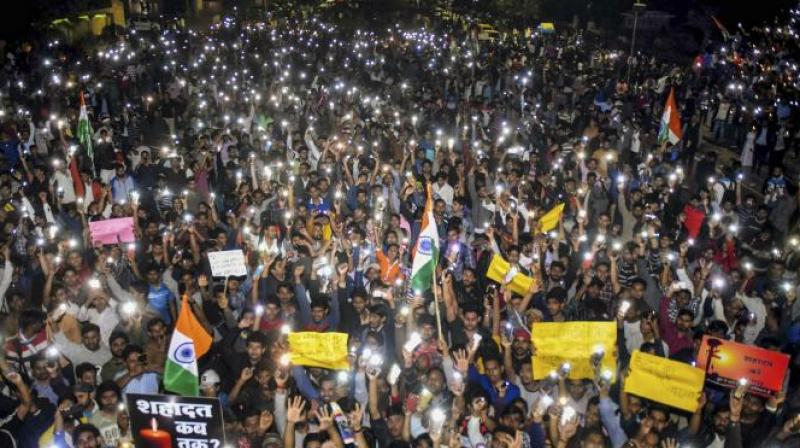 A candlelight protest will be held outside the Pakistan Consulate in Chicago after which the protesters will march to the Chinese consulate. (Photo: PTI | Representational)

Washington: The Indian American community will hold peaceful protests outside the Pakistani and Chinese diplomatic missions in the US over the Pulwama terrorist attack, alleging China provides tacit support to Pakistan which uses non-State actors against its neighbors.

A candlelight protest will be held outside the Pakistan Consulate in Chicago after which the protesters will march to the Chinese consulate on Thursday, February 21, the organizers have said.

The main objectives of the protest, according to the organizers, are to "expose the barbaric nature" of Pakistani terrorism and to wake up the world against Pakistan- and China-supported terrorism, a media release said.

The next day, the Indian Americans in New York and New Jersey area would hold another peaceful protest outside the Pakistani consulate in Manhattan, New York.

"It is time that the United States and rest of the world speak in unison against Pakistani establishment's continued support to terrorists in recruiting, training, arming, finance and providing a safe haven," eminent Indian American Dr. Bharat Barai said in a statement.

Billions of dollars of US aid to Pakistan have done little to curb the terror outfits in Pakistan, he rued.

Forty Indian paramilitary personnel were killed on February 14 when a JeM terrorist rammed his explosive-laden in a car in a vehicle carrying the jawans.

"This is not an act of terrorism but the act of war. Pakistan will have to pay a heavy price for this. Time has come to take decisive and ruthless action against the perpetrators of this heinous crime against humanity," said New York-based Jagdish Sewhani, the president of the American India Public Affairs Committee.

"The Indian community is deeply pained by this mindless barbaric act. We are grieving for our slain soldiers and at the same time we want Pakistan to take strict actions against the terrorists," said a local Republican leader from Illinois J D Diganvker.

"We want the world community to take note. We all know terrorism has no place in the world today and we want the world to urge Pakistan to respond with stringent actions," he said, adding the protestors plan to submit memorandums to the Pakistani and Chinese consulates in Chicago.

It is time to declare Pakistan a terrorist State and isolate it completely -- both economically and militarily -- until it mends its ways, demanded community organizer Nirav Patel.

China's designs to use rogue nations such as Pakistan and North Korea to further its expansionist agenda is no secret, he alleged. "It is also critical to urge China, which has repeatedly blocked the efforts in the UN by both the US and India to declare Masood Azhar, the head of Jaish-e-Mohammed terrorist Organization, as a global terrorist," he said.

Community leader Amitabh Mittal said Pakistan was not just an India or a US problem. "It's an international problem that has become a breeding ground for terrorists who expand their network (e.g. Al-Qaeda and its offshoots) worldwide wreaking havoc and destruction in several countries in the world."

The BAPS, as an organization and its followers, have also pledged financial support of Rs 10 million to support the victims and their family members on the road to recovery. "Terror against anybody is a terror against us all," said Jeff Spivey, the Chief of Irving Police Department, Texas, after attending a special prayer service organized by the BAPS.

Condemning in the strongest terms the dastardly act of terror in Pulwama, Indian American Muslim Council in a statement called for a thorough investigation and bringing the perpetrators to justice.

It is vital for peace in South Asia as well as Pakistan's own future to end all overt and covert support for non-State actors and eliminate all safe havens granted to such militant proxies, said its leader Nadeem Nusrat.

Welcoming the US statement calling for Pakistan to take swift action against terror groups operating from its soil, Nusrat said the United States has played a leading and decisive role in the elimination of many terror sanctuaries around the world.

People of South Asia are looking towards the US administration to play a similar role in establishing lasting peace in the region, he said.