Pak raked up issue of Kulbhushan Jadhav in UNSC after India, US, Afghanistan accused it for providing safe havens to terrorists. 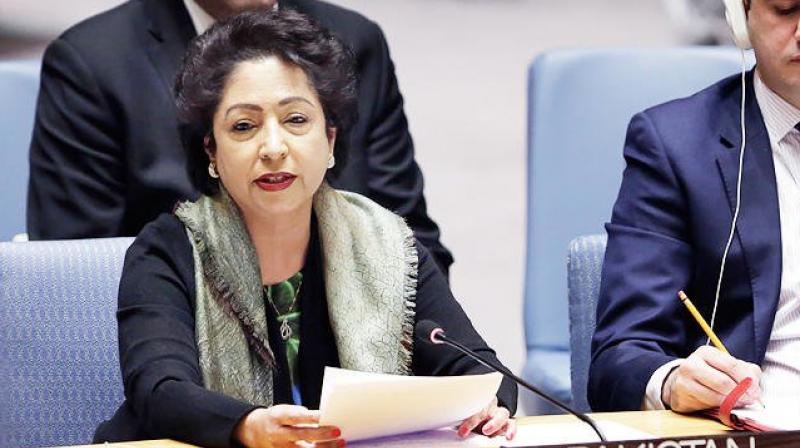 'Those who talk of changing mindset need to look within, at their own record of subversion against my country as our capture of an Indian spy has proven beyond doubt,' Permanent Representative of Pak to the UN Maleeha Lodhi said. (Photo: File | AP)

United Nations: Pakistan raked up the issue of Indian death-row prisoner Kulbhushan Jadhav in the UN Security Council after it was accused by India, the US and Afghanistan, for providing safe havens to terrorists.

Permanent Representative of Pakistan to the UN Maleeha Lodhi was responding to Indian Ambassador to the UN Syed Akbaruddin who said Pakistan needs to change its "mindset" of differentiating between good and bad terrorists.

India urged the UN Security Council to focus on challenges posed by terrorism emanating from the safe havens from across the border.

In response to India, Lodhi said raked up the case of Jadhav, who was captured in March 2016 and sentenced to death by a Pakistani military court for alleged spying, an accusation that India has dismissed as concocted.

"Those who talk of changing mindset need to look within, at their own record of subversion against my country as our capture of an Indian spy has proven beyond doubt," Lodhi told the members of the UN Security Council, without naming Jadhav.

Earlier, the US told the UN Security Council that the status quo regarding continues terrorist safe havens in Pakistan is not acceptable.

The US has said that the status quo regarding continued terror safe havens in Pakistan is not acceptable and insisted that Islamabad join its efforts to bring a resolution to the conflict.

"We seek to work cohesively and effectively with Pakistan, but cannot be successful if the status quo, one where terrorist organisations are given sanctuary inside the country’s borders, is allowed to continue," US Deputy Secretary of State John Sullivan told the ministerial meeting.

And the Afghan Deputy Foreign Minister Hekmat Khalil Karzai reiterated the presence of terrorist safe haven across the border. But Lodhi continued to be in denial. "Indeed, with its safe havens inside the country and income from the narcotics trade, the insurgency does not really need any outside assistance or support centers to sustain its efforts," Lodhi said during a ministerial debate on Afghanistan.

"Afghanistan and its partners, especially the United States therefore need to address these challenges inside Afghanistan rather than shifts the onus for ending the conflict on to others," Lodhi said.

Afghanistan needed to address the challenges inside the country rather than shifting the onus for ending the conflict to others, she alleged.

"Those who imagine sanctuaries outside really need a reality check," she said

But there were no takers for Lodhi's claims that there are no terrorist safe havens inside Pakistan.

None of the more than two dozen speakers came out in support of the Pakistani argument in this regard.