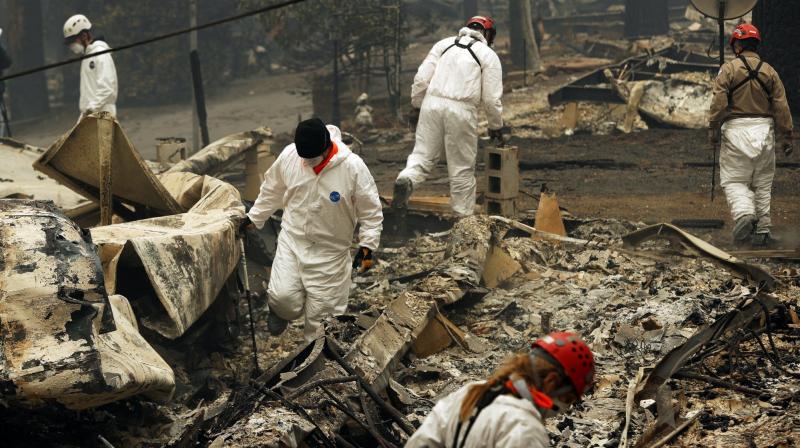 Hundreds of volunteers are sifting through ash and debris, searching for human remains before expected rains complicate their efforts. (Photo: AP)

Chico: Authorities say one more set of human remains has been found, bringing the total number killed in a devastating California wildfire to 77.

Over a thousand names remain on a list of those unaccounted for after the so-called Camp Fire swept through the rural town of Paradise on November 8.

Authorities stressed that many of those may be safe and unaware they have been reported missing.

Hundreds of volunteers are sifting through ash and debris, searching for human remains before expected rains complicate their efforts.

The predicted downpours could wash away telltale fragments of bone, or turn loose, dry ash into a thick paste that would frustrate the search.

The fire was 65 per cent contained on Sunday.

Crews searching for remains of people after the devastating Northern California wildfire are stepping up their efforts ahead of rains forecast for later this week that could complicate their work. A team of 10 volunteers along with a cadaver dog were examining burned houses on Sunday in a Paradise neighbourhood looking for victims. They're focusing on vehicles, bathtubs and mattress springs that would indicate a charred bed.

If no remains are found, the team leaves a note in orange spray paint near the home.

Rain would help suppress the fire but could also complicate the search and recovery effort. Officials say ash that is now dry and easy to dust off would turn into paste, making it harder to uncover remains.

The National Park Service says all but one of 13 mountain lions being tracked in Southern California mountains have been accounted for following a devastating wildfire. As of Friday, the only missing mountain lion was one dubbed P-74, a young male born last year. In addition, all four bobcats that the agency monitors via GPS have been located in the Santa Monica Mountains northwest of Los Angeles.

Officials have again increased the number of homes and other structures burned by a huge Southern California wildfire. The figure rose Sunday to 1,130 buildings destroyed - many of them homes - and 300 damaged. The tally is continuing.

Firefighters are making progress against the blaze that broke out November 8 and tore through communities west of Los Angeles from Thousand Oaks to Malibu. More evacuees have been allowed back in their homes and the 151-square-mile (391-square-kilometer) blaze is now 88 percent contained.

California's governor is expressing optimism that President Donald Trump will support the state as it deals with raging wildfires.

Democratic Governor Jerry Brown said in an interview on CBS' "Face the Nation" airing Sunday that the Republican president has "got our back" and has pledged to continue to help.

Trump initially blamed state officials for poor forest management in exacerbating the fires and threatened to cut off federal funding. He's since signed an emergency declaration and toured the devastated areas Saturday with Brown and Governor-elect Gavin Newsom.

Brown also suggested in the CBS interview that the wildfires will make believers of even the most ardent climate change skeptics "in less than five years" and that those living near forests might need to build underground shelters to protect them from wildfires going forward.

Pope Francis has prayed for victims of California's wildfires and freezing weather on the US East Coast.