The Supreme Federal Tribunal opened an investigation into the accusations and lifted the seal on the recording. 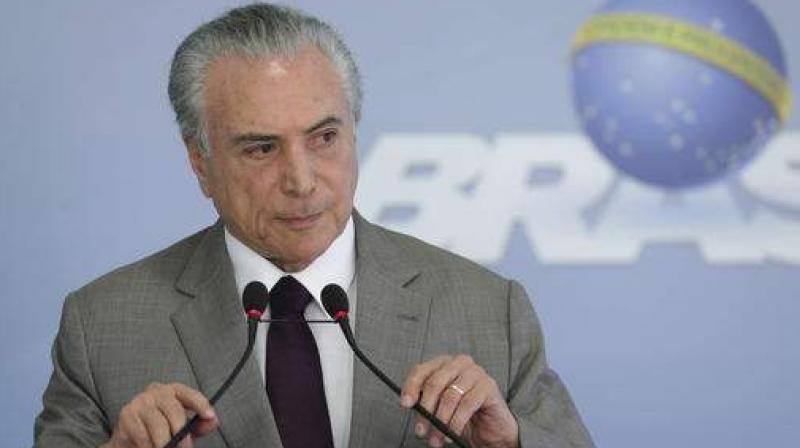 Rio De Janeiro: Brazilian President Michel Temer on Thursday rejected calls for his resignation, saying he will fight allegations that he endorsed the paying of hush money to a former lawmaker jailed for corruption.

Even in this country weary from the constant drip of revelations of a wide-ranging corruption investigation, the incendiary accusation set off a firestorm and Brazil's highest court opened an investigation. Stocks and the currency plunged and rumors circulated that Temer would step down.

Instead, the embattled leader remained defiant in a national address to respond to allegations he was recorded endorsing payments to former lower House Speaker Eduardo Cunha.

The existence and the contents of the recording were reported Wednesday night by the Globo newspaper. "At no time did I authorize the paying of anyone," Temer said emphatically, raising his voice and pounding his index finger against the podium. "I did not buy anybody's silence." "I will not resign," he said.

The Supreme Federal Tribunal opened an investigation into the accusations and lifted the seal on the recording. Globo then posted the nearly 39-minute recording, which is scratchy and often inaudible.

In it, two men can be heard talking about Cunha, who is now serving a sentence on corruption charges but many believe could still provide damaging testimony about dozens of other politicians.

Globo's report said they are Temer and JBS meat-packing company executive Joesley Batista. One man, who is apparently Temer, complains that Cunha could potentially embarrass him.

"Within my limits, I did the most I could there. I settled everything," responds the other man, apparently Batista. "He came and collected, etc., etc., etc. I am good with Eduardo, OK?" The first man then says; "You have to keep that up, see?" To which the second man responds: "Every month." Even before the audio was released, Thursday began in a panic after Globo's report.

Within 90 minutes of the opening, Brazil's main Ibovespa stock index dropped 10 percent and trading was stopped for 30 minutes. Brazil's currency, the real, lost 8 percent of its value against the US dollar, according to the Central Bank's closing figure. Congress cancelled its sessions, including suspending work on legislation that Temer's administration hopes will pull Latin America's largest economy out of its worst recession in decades.

The pressure built against Temer throughout the day. There was talk that Cabinet ministers were considering quitting their posts, and the culture minister did step down by day's end. Opposition politicians called for his impeachment. Two small allied parties pulled their support for Temer in Congress.

"There are parties leaving his base, ministers leaving the Cabinet. Even if the recordings don't show something that terrible, you can't put the toothpaste back in the tube," said Claudio Couto, a political science professor at Fundacao Getulio Vargas, a Sao Paulo-based university and think tank. "If Temer doesn't fall, he will lead a walking dead administration."

In the evening, hundreds of people calling for Temer's removal gathered on a main avenue in Sao Paulo, the country's largest city and the financial capital. "After the contents of the tape became public, there's no other way out for Temer than to leave," said Augusto Tadeki, a 23-year-old unemployed computer technician. "He either has to resign or he'll be impeached. We will stay here; we will demonstrate every day until he leaves."

Five of the top 10 trending topics in Brazil on Twitter were related to the scandal, including the subject "Temer will resign." Many Brazilians expressed shock on social media when Temer finally spoke Thursday night and said he would stay in power. "Michel Temer is like that boyfriend who doesn't know it's over," one Twitter user said.

Since its start three years ago, the "Car Wash" investigation into a kickback scheme at oil giant Petrobras has revealed a scale of corruption that has shocked even the most cynical Brazilians and put several top businessmen and politicians in jail. In recent months, the probe has moved closer to the president and his circle.

Globo also reported that Sen. Aecio Neves had been recorded asking Batista for USD 700,000 to pay for his defense in the "Car Wash" corruption probe.

On Thursday, police searched Neves' Rio de Janeiro home and Brasilia office, and Brazil's highest court suspended him from office. Neves, who nearly won the presidency in 2014 and planned to run again next year, has denied wrongdoing.

According to the Globo report, Batista secretly recorded the conversations with Temer and Neves and gave them to justice officials as part of plea bargain negotiations. Globo did not release the recordings or say how they were obtained.

In a statement Thursday, Batista acknowledged his company had made a mistake and apologized. He promised not to tolerate corruption going forward.

If confirmed, the allegations could prove devastating for Temer, whose administration has lurched from one crisis to another since he took office just over a year ago after Dilma Rousseff was impeached and removed as president. Temer's approval ratings are hovering around 10 percent.

In April, it came to light that eight of his Cabinet ministers were being investigated in cases related to bribery or accepting campaign donations from Brazilian construction company Odebrecht, one of the central businesses implicated in the kickback scheme at Petrobras. "I can't see how Temer survives this," said David Fleischer, a political science professor at the University of Brasilia. "There are just too many people agains