UN SG Antonio Guterres has said multilateralism is needed to solve global challenges such as climate change and terrorism. 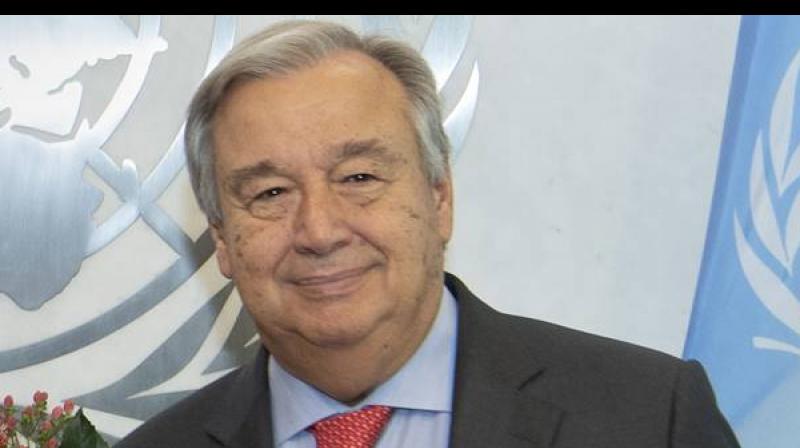 The secretary general said the UN needs to demonstrate through concrete solutions. (Photo:File)

Washington: United Nations Secretary General Antonio Guterres has said multilateralism is needed to solve global challenges such as climate change and terrorism. Convinced that simply saying this will not make it happen, he said “dismissing or vilifying the doubters of multilateralism will lead nowhere.”

The truth is that many people around the world are not convinced of the power and purpose of international cooperation. “We need to understand why - and act on that understanding,” he told reporters Friday at a news conference at the UN headquarters in New York.

Guterres said that as "we look to the challenges we face – from climate change to migration to terrorism to the downsides of globalisation – there is no doubt in my mind that global challenges require global solutions." No country can do it alone.

"We need today multilateralism more than ever,” he said. The UN secretary general said when he served in the government in Portugal in the 1990s, there was a "sense, a naive sense as it turned out," that globalisation and technological progress would solve all the problems in the world and the benefits would ultimately reach all.

Now, a generation later, the world has seen indeed many benefits. There has been a dramatic increase in global wealth, infant mortality is down, life expectancy has increased and there has been significant reduction in extreme poverty, he said. But, inequalities have grown among countries, even more so within them.

People, sectors, entire regions have been left behind, Guterres rued. "They have been left behind in an atmosphere of overall global prosperity -- adding to their hurt and sense of unfairness. When people see a global economy that is out of whack, when they feel they have no chance, no hope, and no leader or institution tuned to their problems, instability and mistrust are sure to follow,” he said.

Observing that there is a huge deficit of trust in governments, political establishments and international organisations, he said at such times, explanations can sound like excuses, and people can become easy targets for nationalists, populists and all those who profit from fear.

“The best-selling brand in our world today is indeed fear. It gets ratings. It wins votes. It generates clicks. So I believe the biggest challenge that governments and institutions face today is to show that we care -- and to mobilize solutions that respond to people's fears and anxieties with answers, concrete answers,” Guterres said.

The secretary general said the UN needs to demonstrate through concrete solutions that it is standing up for the people left behind and is connected to their needs, aspirations and everyday problems. The key is a fair globalisation, and the 2030 Agenda for Sustainable Development is the UN's blueprint for that fair globalisation, he said.

The world body also need to ensure education, training and safety nets to support all those who are sidelined by change and help them regain opportunity and hope for their future.

“Second, we need to show the added value of the United Nations,” Guterres said. Finally the UN needs to enlist every segment of society in the battle for values that the world faces today. In particular, to tackle the rise of hate speech, xenophobia and intolerance, he said.

“We hear troubling, hateful echoes of eras long past. Poisonous views are penetrating political debates and polluting the mainstream,” Guterres said He added that hate speech and crimes are direct threats to human rights, sustainable development and peace.