After entering the house, they found four men including Ovidio Guzman, who is accused of drug trafficking in the United States. 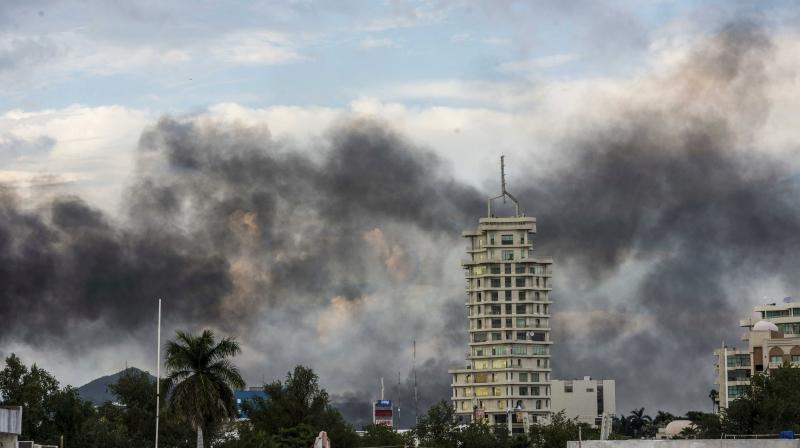 Smoke from burning cars rises due in Culiacan, Mexico, Thursday, Oct. 17, 2019. An intense gunfight with heavy weapons and burning vehicles blocking roads raged in the capital of Mexico’s Sinaloa state Thursday after security forces located one of Joaquín “El Chapo” Guzmán’s sons who is wanted in the US on drug trafficking charges. (Photo: AP)

Security Minister Alfonso Durazo said a patrol by National Guard militarized police first came under attack from within a house in the city, 600 km (370 miles) northwest of Mexico City.

After entering the house, they found four men including Ovidio Guzman, who is accused of drug trafficking in the United States.

The patrol was quickly overpowered by cartel gunmen, however, and the decision was taken to withdraw to protect the lives of the National Guard and restore calm in the city, where gangsters had set up roadblocks and were unleashing heavy automatic gunfire, Durazo said.

"The decision was taken to retreat from the house, without Guzman to try to avoid more violence in the area and preserve the lives of our personnel and recover calm in the city," Durazo said.

The chaotic scenes in Culiacan, long a stronghold for the Guzmans' Sinaloa cartel, will increase pressure on President Lopez Obrador, who took office in December promising to pacify a country weary after more than a decade of drug-war fighting. Murders this year are set to be at a record high.

The scenes in Sinaloa follow the massacre of more than a dozen police in western Mexico earlier this week, and the killing of 14 suspected gangsters by the army a day later.

'El Chapo' Guzman led the Sinaloa cartel for decades, escaping from prison twice before being arrested and extradited to the United States. He was found guilty in a US court in February of smuggling tons of drugs and sentenced to life in prison.

He is believed to have about 12 children including Ovidio. The US Department of Justice unveiled an indictment against Ovidio and another of the brothers in February, charging them with conspiracy to distribute cocaine, methamphetamine, and marijuana in the United States.

The indictment gave Ovidio's age as 28, and said he had been involved in trafficking conspiracies since he was a teenager.