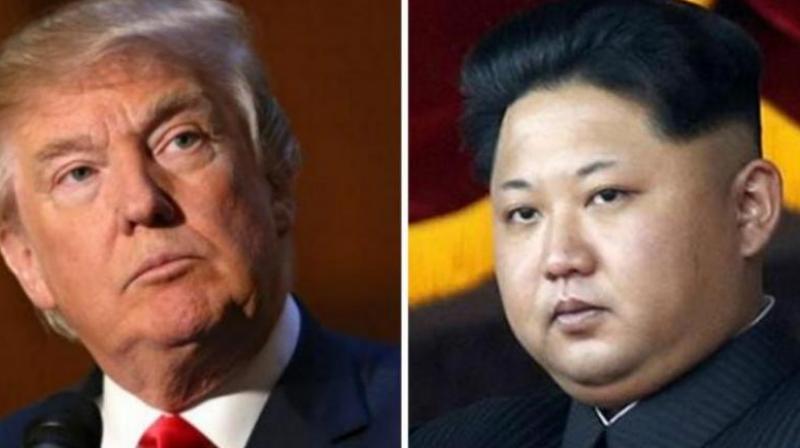 North Korea has a military nuclear weapons programme and also has a significant amount of chemical and biological weapons. (Photo: AFP)

Washington: United States President Donald Trump will start his five-nation tour from November 3 to call on the international community to pressurise North Korea over its nuclear programme.

During a five-nation Asia tour plus a stop in Hawaii from November 3 to 14, Trump will "call on the international community to join together in maximizing pressure on North Korea", said The White House in a statement.

North Korea has a military nuclear weapons programme and also has a significant amount of chemical and biological weapons. Since 2003, North Korea is no longer a party to the Treaty on the Non-Proliferation of Nuclear Weapons (NPT). The country has come under sanctions after conducting a number of nuclear tests, beginning in 2006.

Trump, in his address at the UN General Assembly last month, said North Korea's supreme leader Kim Jong-un is "a rocket man, who is on a suicide mission".

He further said, "It is time for North Korea to realise that de-nuclearisation is its only acceptable future."

"No nation on earth has an interest in seeing this band of criminals armed with nuclear weapons and missiles. The United States had has great strength and patience, but it is forced to defend itself or its allies we will have no choice but to totally destroy North Korea," Trump said.

Trump will visit Japan from November 5 for talks with Prime Minister Shinzo Abe and a meeting with the families of Japanese nationals abducted by North Korea in the 1970s and 1980s, Kyodo News reports.

The Abe-Trump talks and Trump's meeting with the kin of abduction victims - including the parents of Megumi Yokota who was abducted when she was 13 - are expected to take place on November 6, Kyodo News quoted Japanese officials as saying.

According to the White House, Trump will also meet with US forces stationed in Japan and members of Japan's Self-Defense Forces.

In the bilateral summit, Abe and Trump are expected to affirm close coordination in addressing North Korea's nuclear, missile and abduction issues.

Japan officially lists 17 citizens as abduction victims and suspects North Korea's involvement in many more disappearances. While five of the 17 were repatriated in 2002, Pyongyang maintains that eight -- including Yokota -- have died and the other four never entered the country.

After visiting Japan, Trump will travel to South Korea for talks with President Moon Jae In on November 7. Trump will also speak at the National Assembly, at which he will celebrate the "enduring alliance and friendship" between Washington and Seoul.

During a visit to Beijing from November 8, the US leader will meet with Chinese President Xi Jinping and attend a series of commercial and cultural events.

On November 10, Trump will travel to Danang, Vietnam, for a summit of the Asia-Pacific Economic Cooperation forum and deliver a speech at an APEC business summit.

"In the speech, the president will present the United States' vision for a free and open Indo-Pacific region and underscore the important role the region plays in advancing America's economic prosperity," the White House said.

After meeting with Vietnamese President Tran Dai Quang in Hanoi on November 11, Trump will visit Manila the following day for summit meetings related to the Association of Southeast Asian Nations.