Venezuela is the 2nd largest receiver of foreign immigrants in South America, behind Argentina. 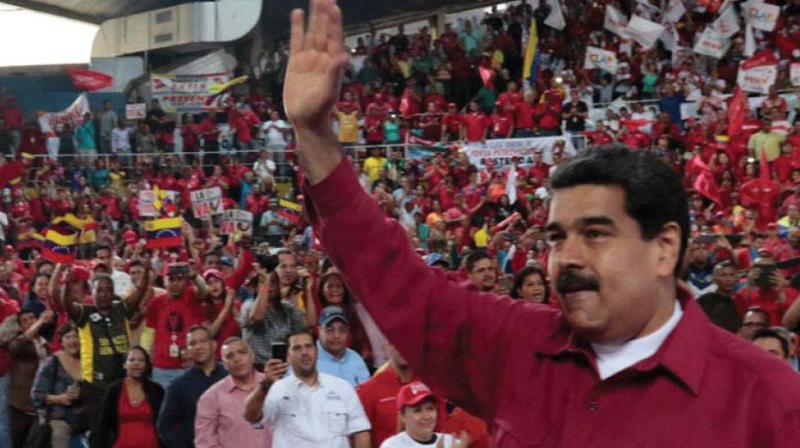 The ongoing economic plan announced by President Maduro has been designed by some of the brightest economic minds of Venezuela to structurally bypass the illegal economic sanctions imposed by the US administration.

Venezuela is under attack. Venezuela’s economy, its people, its government and its prestige are under constant aggressions by those who wish to promote a violent change of government no matter the costs.  Powerful lobbies linked to the North American banking system, oil companies, the Trump administration and western news agencies want control of the world’s largest Oil and Coltan reserves, which lie in Venezuela, as well as to dominate the geostrategic position of the country and submit its vibrant and energetic sovereign democracy and independence.

Just weeks after the implementation of a successful economic recovery plan, these lobbies, with links to the current administrations in the US and Colombia intend to overshadow the positive results of the plan with a new deadly narrative, “the humanitarian crisis that requires foreign intervention”, so they can topple the Venezuelan government.

The narrative of these western news agencies excludes the fact that Venezuela achieved 100% literacy in 2005 as part of the completion of the Millennium Development Goals in 2008 (six-and-a- half years ahead of schedule). Venezuela has the 2nd highest primary health coverage in the world, the 5th highest university enrollment, free Wi-Fi in all public recreational areas, the highest women empowerment in all sections of society, the world’s most transparent and efficient electoral system (ex-president Jimmy Carter: 2004, 2007, 2012), free education is guaranteed for children from day care to postgraduate degrees, 3 million fully furbished homes in under five years and the second highest Human Development Index (UN reports). All of these social achievements show the existence of a vibrant democracy whose institutions work for the interests and benefits of the people.

In short, everything positive, including the economic recovery plan, is hidden from the news.

Unbelievably, the narrative of the western news agencies and the US administration didn’t even bring in the official reports of the International Organization for Migration (IOM) or the office of the United Nations High Commissioner for Refugees (UNHCR), because they dispel the views expressed by these western news agencies’ false reports.

Venezuela is the 2nd largest receiver of foreign immigrants in South America, behind Argentina. In 2017 alone, 100 thousand Colombians crossed the border escaping from poverty, paramilitary violence and lack of basic services. They intend to stay, joining an already vast community of 5.6 million Colombians in Venezuela. The country has the best system of social welfare in the region, guaranteeing free food, medicine and housing to all, including 600 thousand Peruvians and 500 thousand Ecuadorians, as well as thousands of persons of European, African and Asian origin. (IOM World Migration Report 2018 - http://www.iom.int/wmr/world-migration-report-2018)

The new Permanent Representative of UNHCR in Venezuela, Peter Grohmann, has complemented this report last week, stating that, in the current decade, Venezuela is the 2nd country with the least number of outgoing migrations in the region (Uruguay is the country with the least amount of immigrants), far behind neighbouring Colombia who holds the sad record of largest Diaspora due to 50 years of internal armed conflict.

The false narrative doesn’t take into account the benefits migrants have received in Venezuela, as opposed to the numerous cases of increased media induced xenophobia and hate crimes that are affecting Venezuelans in Brazil, Colombia, Peru and Ecuador. That is why President Maduro has actively assisted almost 1000 Venezuelans in just the last few days and has approved an air link to help bring home those who were deceived into migrating and who now wish to return to Venezuela. Their return is a vote of confidence in the success of the newly implemented economic plan.

The exaggerated of western media reports are so unfounded, they are easily dispelled by the simple evidence. The Venezuelan Vice President Delcy Rodriguez quoted a study done by the IOM and published in the Colombian Foreign Ministry website (http://www.cancilleria.gov.co/newsroom/news/oim-cancilleria-migracion-colombia-revelan-estudio-flujo-migratorio-frontera-colombo) directly contradicting the official biased position of the Colombian government. It states that 67% of the people who cross the Colombian-Venezuelan border are of Colombian citizenship and that only 33% are Venezuelans. Furthermore, only 5% of those crossing the border migrate to Colombia while 69% of the persons returned the very same day.

Obviously the plan is to manipulate world public opinion, create confusion and uncertainty in Venezuela, delegitimize the recovery plan and justify foreign intervention against Venezuelan families who are already resisting attacks that violate democracy and international law.

The ongoing economic plan, widely popular and accepted according to independent published polls, announced by President Maduro, has been designed by some of the brightest economic minds of Venezuela to structurally bypass the illegal economic sanctions imposed by the US administration and the economic sabotage of food hoarding, smuggling and currency manipulation promoted by corporate agents from US government neighbouring allies.

The ploy is to create an artificial “humanitarian crisis” to justify what General John Kelly, current White House Chief of Staff has called “a need to intervene militarily in Venezuela in case there is a humanitarian crisis”. The end result would be the same as Iraq and Libya:  pillage, murder, oil and domination.

Thankfully, in short time after President Maduro’s plan came into effect, already the results started to show, the top 12 corporations of the country have sat down with the government to set a Maximum Retail Price for basic food products, guaranteeing the elimination of the induced shortages and mitigating the effects of politically motivated inflation.

It increased salaries to match the prices of goods and services, pegged at international levels.

The government has allowed for foreign investors to receive preferential treatment, tariff and tax exemptions to generate more foreign reserves.

The incentives to foreign investors have also had a profound positive impact in the oil sector as is shown by the informed interest of companies in like-minded countries to invest an initial $5 billion to boost oil production in Venezuela.

These actions will not only put Venezuela on the path to sustained economic growth and development, but are also a shield from the US financial sanctions and an alternative to boost south-south trade and prosperity.

Just in India, more and more potential investors have approached the Embassy with an interest for reliable information; some have heard of Venezuela’s plan to diversify its exports and enquire about the competitive rates in scrap metal, minerals, cocoa beans and lumber, and some want to know about the preferential trade agreements Venezuela has with 21 of the 33 countries in Latin America and the Caribbean, allowing from easy market placements in neighbouring economies, thanks to a robust freight infrastructure (food and agriculture exports).

As one of India’s most reliable sources of energy, with this economic recovery, Venezuela not only has the potential to increase India’s energy security and development, but thanks to the government’s empathy with the Indian government, the increase in trade and bilateral investment can turn Venezuela’s geostrategic position in Latin America into a hub for Indian commercial presence in the entire region.

Venezuela is set to economic recovery, all partners and stakeholders are welcome to share in the benefits of mutual prosperity and development in the wave of increased trade links and investments.

The writer is Venezuela’s ambassador to India