Philippines typhoon: Search on for victims, death toll rises to 74

Hundreds of rescuers used shovels and their bare hands on Tuesday to sift through a landslide in Itogon where dozens are feared dead. 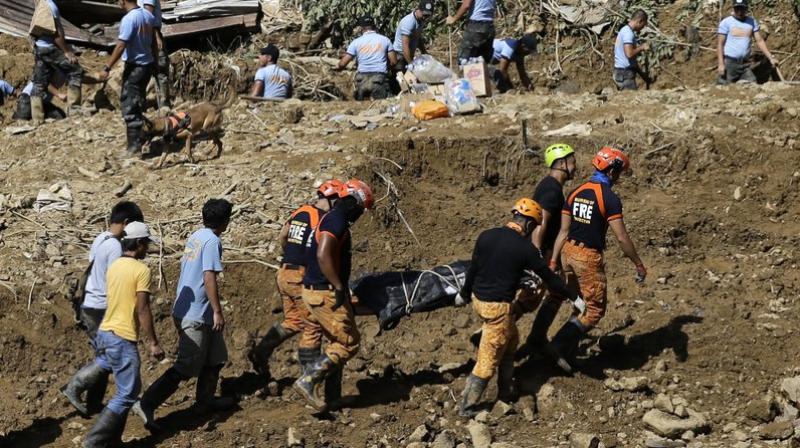 Rescuers carry a body they recovered at the site where victims are believed to have been buried by a landslide after Typhoon Mangkhut lashed Itogon, Benguet province in northern Philippines. (Photo: AP)

Itogon (Cordillera Administrative Region): Hundreds of Philippine rescuers used shovels and their bare hands Tuesday to sift through a massive landslide where dozens are feared dead in the region worst-hit by deadly Typhoon Mangkhut, as the storm's toll hit 74.

The storm, 2018's most powerful, smashed homes and flooded key agricultural regions in the northern Philippines before battering Hong Kong and southern China with fierce winds and heavy rain.

Hong Kong was still struggling to get back on its feet on Tuesday with a massive clean-up operation to clear broken trees, repair torn-up roads and fix damaged power lines. 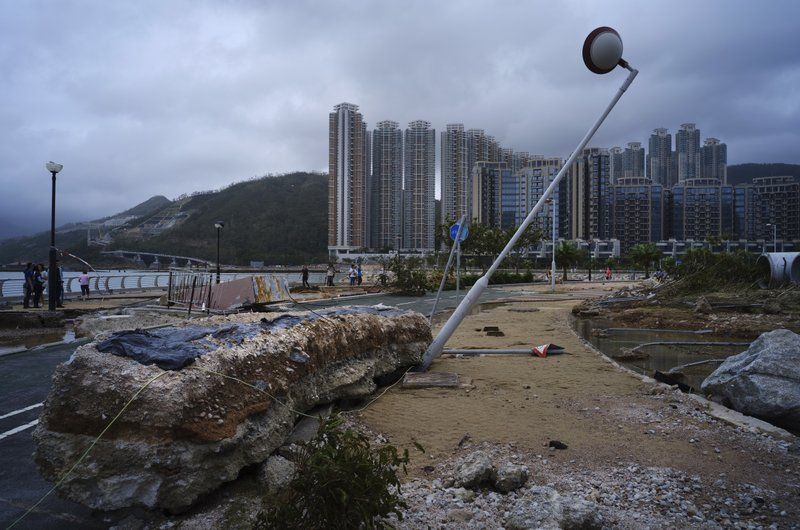 Debris caused by Typhoon Mangkhut is seen outside a housing estate on the waterfront in Hong Kong on Monday, September 17, 2018. (Photo: AP)

The violent typhoon killed four in China's southern province of Guangdong and the toll climbed on Tuesday to 74 on the Philippines' northern Luzon island according to police, with that number expected to rise.

Up to 40 people are still feared buried in the landslide in Itogon, unleashed Saturday as the typhoon stalled over the area and dumped a month's worth of rain in a matter of hours.

"While I said there is a 99-percent chance that all of them are dead, there is still that one-percent chance," local Mayor Victorio Palangdan told AFP.

"The rescue effort will continue until the president orders us to stop," he said. 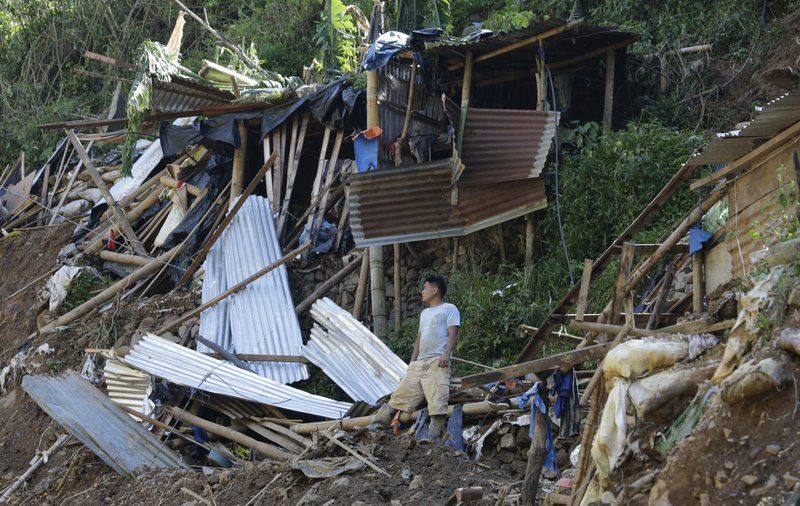 A resident stands beside toppled houses at the site where victims are believed to have been buried by a landslide after Typhoon Mangkhut lashed Itogon, Benguet province, northern Philippines on Monday, September 17, 2018. (Photo: AP)

Because the slide destroyed roads, authorities have been unable to bring heavy equipment into the area to accelerate the search. As a result the teams were using human chains to extract debris.

The area was primed for disaster before Mangkhut hit, as it came on the heels of nearly a month of continuous monsoon rains that left the already hazardous area soggy and dangerously loose.

Almost all the storm's victims were killed in dozens of landslides unleashed along the Cordillera mountain range, a key gold mining area.

Many of those buried in Itogon were small-scale gold miners and their families who took refuge in a building abandoned by large mining firm.

The Philippines has a poor record of regulating mining, with tunnel collapses and landslides in recent years regularly killing people in other gold-rush areas.

Tearful families surrounded a whiteboard bearing names of the dead and missing as others inspected recovered bodies in an attempt to identify their loved ones.

"We found peace that his body has been found. We can't really do anything, it was an accident. Maybe this is God's will," Teresa Buucan told AFP after her nephew's corpse was pulled from the debris.

Across northern Luzon, which produces much of the nation's rice and corn, farms were under muddy floodwater. Farmers were seeing what of their crops could be saved, however, it appears the losses will total more than USD 100 million.

That could add to the Philippines' inflation woes and worsen a spike in rice prices that has hit hard for the nearly quarter of the nation's population that survives on less than USD 2 a day.

In Hong Kong, which was whacked with gusts of more than 230 kilometres per hour (142 mph) that sent buildings swaying and water surging into homes and shopping malls, workers were still busy cleaning up the damage.

After a day of transport chaos in the immediate aftermath of the storm, schools were closed for a second day as authorities worked to restore rail and bus services.

At the height of the deluge, windows in tower blocks and skyscrapers were smashed as people cowered inside, and some roads were waist-deep in water.

The government of the high-rise city described the damage as "severe and extensive" with more than 300 people injured.

The storm made landfall in mainland China late Sunday, killing four in Guangdong including three hit by falling trees.

Authorities there had evacuated more than three million people and ordered tens of thousands of fishing boats back to port before the arrival of what Chinese media dubbed the "King of Storms".