The new deadline is October 31. 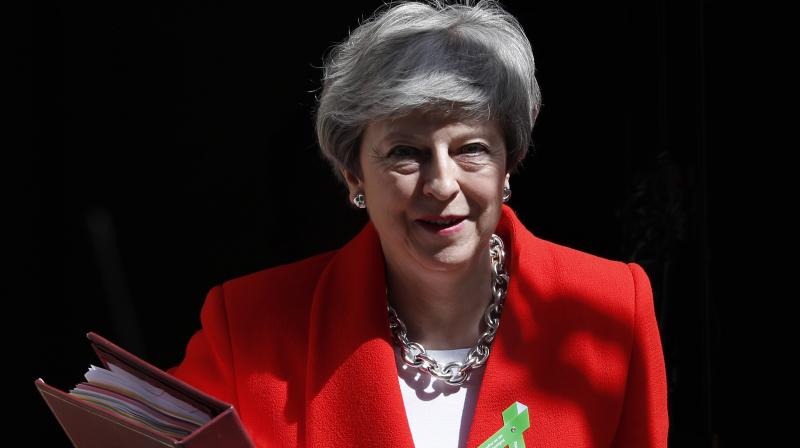 MPs three times rejected the deal Theresa May struck with Brussels, forcing her to delay the date of Brexit twice and to reach out to Labour. (Photo: File)

Labour Party leader Jeremy Corbyn said the gaps between them could not be bridged -- and he had no confidence that her successor would stick to any bargain they might have reached.

The discussions have "gone as far as they can," Corbyn said in a letter to May.

"The increasing weakness and instability of your government means there cannot be confidence in securing whatever might be agreed between us," he said.

Corbyn said Labour would therefore continue to oppose the government's EU divorce deal as it stands.

MPs three times rejected the deal May struck with Brussels, forcing her to delay the date of Brexit twice and to reach out to Labour. The new deadline is October 31.

Parliament is due to vote for a fourth time in early June on the terms of Britain's withdrawal from the EU.

An ashen-faced May said lawmakers would be faced with a "stark choice": voting to deliver Brexit, or "to shy away again".

She was speaking at a rare campaign event ahead of the European Parliament elections, to be held in Britain on Thursday, in which polls suggest her Conservative Party could even come fifth.

Britain was never meant to take part in the elections but will do so because of the postponements to Brexit.

The talks' collapse came the day after May agreed to set out a timetable for her departure following the withdrawal agreement vote in parliament, set to take place in the week beginning June 3.

The arrangement was agreed in a closed-door meeting with rank-and-file Conservative MPs.

It is thought that May will trigger a leadership contest once the Withdrawal Agreement Bill either falls, as seems likely, or reaches completion.

Tim Bale, professor of politics at Queen Mary University of London, told AFP: "It's hard to see her surviving more than two or three weeks and the chances of her plan passing now must be close to zero."

The timetable is likely to mean a new Conservative leader, and therefore prime minister, should be in place before the party's annual conference in September.

Former foreign secretary Boris Johnson is the bookmakers' favourite to replace May. He revealed Thursday that he would run.

Simon Usherwood, from the University of Surrey's politics department, said the end of May did not necessarily mean the end of her EU withdrawal agreement.

"It remains the only plan that the EU has signed up to and there's no indication that it will want to renegotiate any of it with a new PM," he said.

To avoid a no-deal Brexit, it "might have to be pushed through without its original author".

It may also force the Conservatives to re-enter talks with their one-time coalition partners from Northern Ireland's Democratic Unionist Party (DUP), who broke ranks and voted against the deal three times.

DUP leader Arlene Foster said the Labour talks' collapse "demonstrates that the best way to deliver Brexit in the House of Commons is with a Conservative and DUP majority".

But it is far from clear how May intends to proceed.

A leaked document from the failed negotiations, which was sent to Labour on Wednesday, set out a plan for MPs to hold free votes on various Brexit options ranging from a permanent customs union to weaker ties.

According to the document seen by the London Evening Standard newspaper, lawmakers would rank them in order of preference, with the least popular ones knocked out in elimination rounds until a winning plan emerges.

Votes along party lines would also be held on leaving with a deal, leaving on July 31, ending free movement and having as frictionless trade as possible with the EU.

The document said a separate free vote would be held before the process on whether a second referendum should be held.

The pound sank to a three-month low on renewed concerns Britain will leave the EU with no deal.

Edwin Morgan, interim chief of the Institute of Directors business lobby group, said: "It's time to make a decision on the future of this country. We can't live in limbo forever."