The death brought to 96 the number of people who have died in nearly 4 months of protests and political agitation in Venezuela's streets. 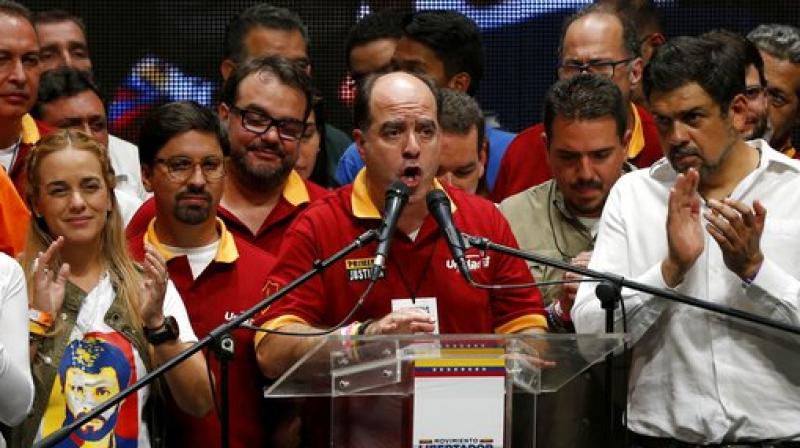 Venezuelan's opposition said more than 7.1 million people responded to its call to vote Sunday in a symbolic rejection of President Nicolas Maduro's plan to rewrite the constitution, a proposal that has raised tensions in a nation suffering through widespread shortages and months of anti-government protests. (Photo: AP)

Caracas: Venezuela's opposition hailed an unofficial "plebiscite" held Sunday as a blow against President Nicolas Maduro and his plan to rewrite the constitution, though deadly violence reared its head again with a deadly attack on voters in Caracas.

Nearly 7.2 million Venezuelans voted in the symbolic election against Maduro, university guarantors said with 95 percent of ballots counted. Venezuela "sent a clear message to the national executive and the world," announced Central University of Venezuela president Cecilia Garcia Arocha, noting that 6,492,381 voted in the country and 693,789 abroad. Garcia said final results would be released Monday.

A 61-year-old woman was killed and three other people wounded when gunmen on motorcycles opened fire on people lined up to vote in Catia, a working-class neighborhood in the capital, prosecutors said.

The death brought to 96 the number of people who have died in nearly four months of protests and political agitation in Venezuela's streets.

The opposition blamed the attack on "paramilitary groups" linked to the government. The central question before voters concerned Maduro's intention to hold an election on July 30 to choose 545 members of a citizens' body called the "Constituent Assembly" that would redo the constitution.

Meanwhile, Venezuelan Foreign Minister Samuel Moncada said on VTV government TV that he was declaring former Mexican President Vicente Fox persona non grata and banning him from the country for conspiring to instigate violence and foreign intervention. Moncada did not provide evidence to back his claims.

Fox, who left Venezuela late Sunday, had traveled to the country with several other Latin American ex-leaders in a show of support for the opposition's referendum.

The Mexican government, critical of Maduro, called for the results of the opposition consultation to lead to a "negotiated solution" to help "restore" democracy.

Ordinary Venezuelans blaming food and medicine shortages on Maduro's policies, however, seized on the vote as a way of telling the president to leave office.

People took to Caracas' streets after the vote shouting "this government is falling" as motorists honked their horns in celebration.

During balloting, one voter, 49-year-old Tibisay Mendez, said that Maduro and his officials "only want to hold on to power We are voting to get them out." Many wore white and the colors of the national flag as they cast their votes.

Several Latin American countries and the Catholic Church have criticized Maduro's move to redraft the constitution. The opposition says it is a bid by Maduro to concentrate dictatorial prerogatives and stay on despite his deep unpopularity, put at 80 percent by Datanalisis.

Julio Borges, leader of the opposition-controlled legislature in Venezuela, said the vote was a watershed moment "in this fight to win back democracy for Venezuela." The political deadlock promises little respite for those suffering in the listing economy of the oil-rich South American nation.

The opposition accuses Maduro of driving the country into bankruptcy, and of using the Constituent Assembly to entirely sideline the legislature. The president, in turn, says the opposition is collaborating with the "imperialist" United States to topple his government.

He says his proposed Constituent Assembly is "the only path" to peace and economic recovery, while relying heavily on the still-loyal military to assert his authority.

But some cracks are appearing in his camp. The most stark was the rebellion of Attorney General Luisa Ortega, who came out against the Constituent Assembly. She holds onto her office, for now, remaining a potent voice of dissent in government.