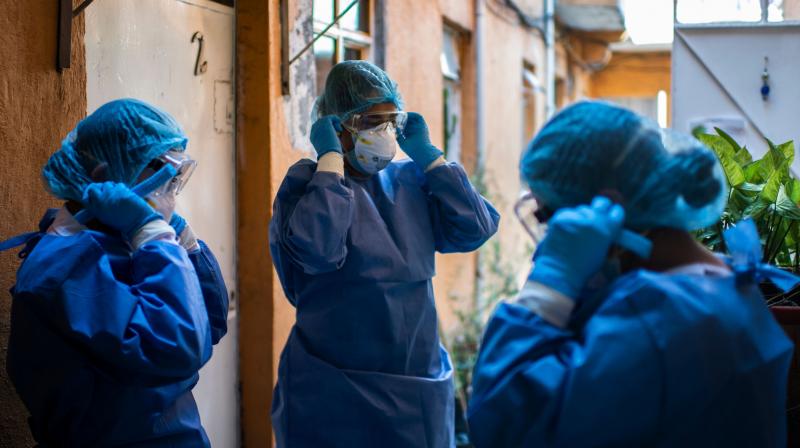 A health brigade gets ready while on door-to-door visits to carry out COVID-19 tests in Mexico City. (AFP)

Washington: With 740 new coronavirus deaths in 24 hours, the United States has seen more people die from the pandemic than died in World War I, according to a tally by Johns Hopkins University.

The increase came after two days of death tolls under 400.

The country's pandemic death toll had already passed that of its soldiers in the Vietnam War in late April.

The United States, where many businesses are reopening, continues to register around 20,000 new cases of the novel coronavirus each day. Several states are even recording their highest levels of new cases since the start of the pandemic.

The administration of President Donald Trump, who has downplayed risks of the virus and instead focused on reviving the economy as he faces a tough re-election battle in November, insists there will be no shutdown of the economy if a second full-blown wave of the epidemic arises.

Federal Reserve Chair Jerome Powell meanwhile warned that the US economy is unlikely to recover as long as "significant uncertainty" remains over the course of the pandemic.

Trump has come under scrutiny for an upcoming campaign rally in Tulsa, Oklahoma -- his first since March when the pandemic halted mass gatherings. It is so far planned for an indoor arena that holds about 20,000 people.

The United States also agreed to keep its borders with Mexico and Canada closed until July 21, officials said Tuesday, extending travel restrictions for a third time due to the pandemic.