An admission data analysis of more than 160,000 applicants from 2000 to 2015 showed Asians were given lower scores on 'personality' traits 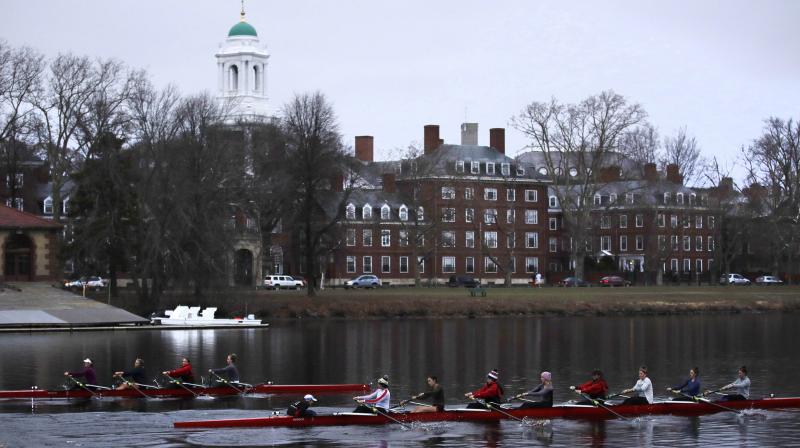 The 388-year-old institution is being sued by Students for Fair Admissions, an action group, for discriminating against Asian applicants. (Photo: AP)

Washington: The prestigious Harvard University in the US racially discriminated against Asian-American students by rating them lower than others applicants on traits like "positive personality," according to a lawsuit against one of the Ivy League schools.

The 388-year-old institution is being sued by Students for Fair Admissions, an action group, for discriminating against Asian applicants, the New York Times reported.

The group commissioned an analysis of admission data of more than 160,000 applicants who applied for admission from 2000 to 2015, which showed that Asians were given lower scores on "personality" traits - likability, courage, kindness and being "widely respected".

Asian-Americans scored higher than applicants of any other racial or ethnic group on admissions measures like test scores, grades and extracurricular activities, according to the analysis commissioned by a group that opposes all race-based admissions criteria. But the students' personal ratings significantly dragged down their chances of being admitted, the analysis found.

The court documents, filed in federal court in Boston, also showed that Harvard conducted an internal investigation into its admissions policies in 2013 and found a bias against Asian-American applicants. But Harvard never made the findings public or acted on them, the report said.

Harvard, one of the most sought-after and selective universities in the country, admitted only 4.6 per cent of its applicants this year. That has led to intense interest in the university's closely guarded admissions process.

Ted Lieu, a congressman for California, blasted Harvard for appearing to "attribute personality traits based on race." He called the report "outrageous", adding that "it feeds into historical damaging stereotypes about Asian-Americans."

In response, Harvard commissioned its own study, which described the report as "incomplete and misleading". "Thorough and comprehensive analysis of the data and evidence makes clear that Harvard College does not discriminate against applicants from any group, including Asian-Americans, whose rate of admission has grown 29 per cent over the last decade,” Harvard said in a statement.

The findings come at a time when issues of race, ethnicity, admission, testing and equal access to education are confronting schools across the country.

Many Ivy League schools, not just Harvard, have had similar ratios of Asian-American, black, white and Hispanic students for years, despite fluctuations in application rates and qualifications, raising questions about how those numbers are arrived at and whether they represent unspoken quotas, the report said.