Butte County Sheriff said number of missing was likely to fluctuate as people call in to report loved ones unaccounted for or found alive. 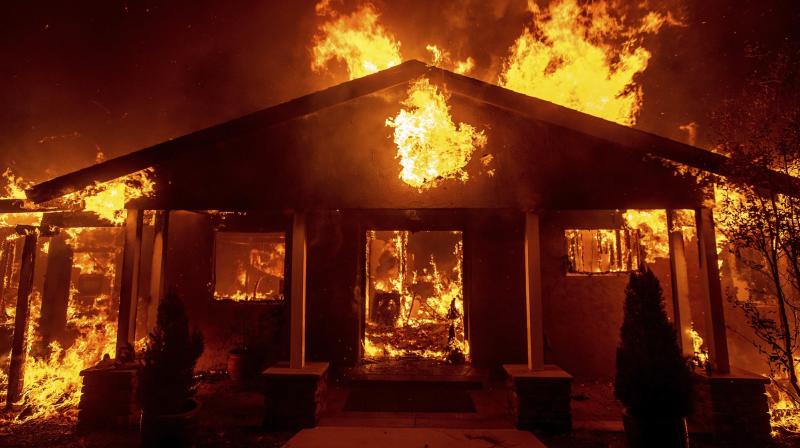 Paradise: The number of people missing in one of California's deadliest wildfires soared to more than 600 on Thursday as the remains of seven additional victims were found by rescuers.

Authorities said the list of missing people had jumped from 300 to 631 during the day as investigators went back and reviewed emergency calls made when the so-called Camp Fire in northern California erupted on November 8.

"I want you to understand that the chaos we were dealing with was extraordinary" when the fire broke out, Butte County Sheriff Kory Honea told journalists, in explaining the staggering new toll of missing.

The seven additional victims bring to 63 the number of people who have died in the Camp Fire.

At least three other people have died in southern California in another blaze dubbed the Woolsey Fire, which engulfed parts of Malibu, destroying the homes of several celebrities.

President Donald Trump is set to visit the western state on Saturday to meet with victims of the wildfires, believed to be the deadliest and most destructive in the state's history.

Many of the victims and the hundreds missing in the Camp Fire were elderly people who lived in the Butte County town of Paradise, in the foothills of the Sierra Nevada mountains. It is believed they were unable to flee the fast-moving blaze or were trapped in their cars as they attempted to escape the inferno.

Honea said the number of those missing was likely to fluctuate as people call in to report loved ones unaccounted for or found alive.

"If you look at that list and see your name, or the name of a friend or loved one, please call to let us know," he said.

Authorities said a wanted felon was killed inside the evacuation zone Thursday following a high-speed chase with police. The man was wanted for a double homicide in 2014 and had been seen for three days camped out in his car.

Virtually every home in Paradise, located 80 miles (130 kilometers) north of the state capital Sacramento, was destroyed by the fire, which was driven by high winds.

Body recovery teams are conducting a painstaking search of burned-out homes for human remains in the town and closely examining the many charred cars littering the roads.

The 63 deaths reported from the Camp Fire make it the deadliest wildfire in California's history, as the inferno also became the most destructive.

The California fire department (Cal Fire) said Thursday that the Camp Fire has destroyed 141,000 acres (56,655 hectares) and was 40 percent contained.

It said nearly 5,500 firefighters were battling the blaze and it did not expect it to be fully contained for another two weeks.

The Woolsey Fire has razed 98,000 acres (39,660 hectares) and has been 62 percent contained. It is expected to be fully contained by Monday.

A number of celebrities have lost their homes in Malibu as a result of the Woolsey inferno, including Pierce Brosnan, Miley Cyrus, Neil Young, Robin Thicke, Shannen Doherty and Gerard Butler.

"This is so devastating that I don't really have the words to describe it," Brown told a press conference. "It looks like a war zone."

Authorities said it was unclear when residents would be allowed back into the town.

While the cause of the Camp Fire is still under investigation, a lawsuit has been filed against the local power company, PG&E, by fire victims claiming negligence by the utility.

The complaint alleged that the fire began on November 8 when a high voltage transmission line failed, igniting tinder-dry vegetation.

The utility was found to be responsible for several devastating fires in northern California last fall that killed at least 15 people, and it faces billions of dollars in liability for the latest wildfires.