A week into investigations, US police clueless on 3-year-old Indian girl’s disappearance

Sherin Mathews vanished last Saturday after her father left her outside as punishment. 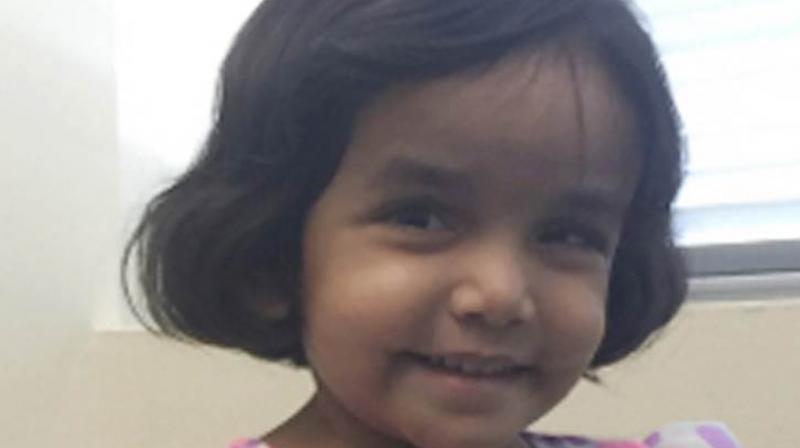 Police in Richardson are yet to find a clue as to what happened to Sherin Mathews. (Photo: AP)

Houston: One week since a three-year-old Indian girl vanished during an alleged incident of bizarre late-night punishment meted out by her Indian foster father, police in Richardson are yet to find a clue as to what happened to her, US media reports said today.

Sherin Mathews vanished last Saturday after her father Wesley Mathews told police he left her outside at 3 a.m. as punishment for not drinking her milk.

Mathews claimed that when he went to check on her around 3:15 am she was gone. Police said he waited five hours before reporting Sherin missing.

During an interview with detectives, Wesley Mathews said he checked around his home for Sherin and then went back inside to do laundry. He was released from jail last Sunday after posting his USD 250,000 bond.

Neighbours of the Indian-American couple have turned the tree across the backyard alley from Sherin’s home in Richardson in Dallas, Texas into a memorial to the little girl. People have left teddy bears, balloons, angel figurines, a box of written prayers, and even a single gallon of milk, reports say.

It is the tree where her father Wesley claims he left the girl as punishment. He claims that when he came back to get her she was gone.

Wesley has since been arrested, and bonded out, on a charge of child endangerment and ordered to wear an ankle monitor as the investigation continues. But after a week, with searches that included the help of the FBI, Richardson police tell News 8 on this 8th day of her disappearance that they have no new information to report.

US Child Protective Services has taken custody of the couple’s older 4-year-old daughter and neither Wesley Mathews nor his wife has talked publicly about what happened.

Police are still looking for any surveillance video or information that will help show them where the family’s SUV went when it disappeared for an hour that morning.

So far, tips from the public have not led to any definitive clues that could lead police to Sherin.

Police are asking people to check surveillance footage for a maroon Acura SUV they say left the home an hour after Sherin disappeared.

"We would like to thank those who have provided tips and video up to this point. We are diligently working our way through all of the material. We continue to request businesses and residents within a 30-minute drive of the 900 block of Sunningdale to check your video systems to see if there is any footage that may have captured a 2013 maroon Acura MDX SUV on Saturday, October 7th, between 4AM and 5AM,” Richardson Police Department said recently in a Facebook post.

Police have not said how they know the car was missing or who was driving. Investigators removed three of the family's cars, including the Acura SUV, from the home earlier last week for analysis.

Detectives have not said whether Wesley Mathews is a suspect, but they have cleared his wife Sini Mathews. Police previously said she was asleep and unaware her husband had made their daughter stand outside as punishment.

"She is distraught. As you are all aware, they adopted Sherin, and they love Sherin," Sini's attorney Kent Starr said. "All she wants is for her daughter to be returned."