Red tide is suspected as the cause of Speck’s death, but researchers won’t know for certain until lab results come back in next few weeks. 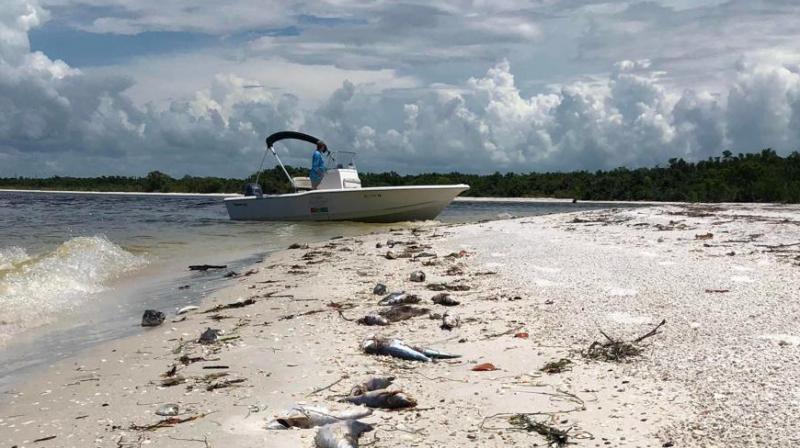 More than 100 tons of dead sea creatures have been shoveled up from smelly, deserted beaches in tourist areas along Florida's southwest coast this month alone. In just the past week, 12 dolphins have washed ashore dead in Sarasota County, typically the toll seen in an entire year. (Photo: AFP)

Sarasota: A state of emergency has been declared in Florida as the worst red tide in a decade blackens the ocean water, killing dolphins, sea turtles and fish at a relentless pace.

More than 100 tons of dead sea creatures have been shovelled up from smelly, deserted beaches in tourist areas along Florida’s southwest coast as a result of the harmful algal bloom this month alone.

In just the past week, 12 dolphins washed ashore dead in Sarasota County, typically the toll seen in an entire year.

“It is physically and mentally exhausting,” said Gretchen Lovewell, who is in charge of a skeleton crew at Mote Marine Laboratory that collects dead or distressed sea turtles and marine mammals.

She and two colleagues “have been literally working around the clock,” Lovewell added.

On Sunday, near the fluffy sands of Siesta Key, one of America’s top-ranked beaches, Lovewell recovered the remains of a decomposing dolphin. A faint number, 252, was visible, freeze-branded onto its dorsal fin.

It was a 12-year-old male named Speck, who had been spotted more than 300 times by researchers monitoring generations of bottlenose dolphins in the Sarasota Bay.

“It was devastating,” said Randall Wells, director of the Chicago Zoological Society’s Sarasota Dolphin Research Program, the world’s longest-running study of a wild dolphin population, under way since 1970.

Wells pulled out a map showing where researchers have seen Speck over the years. He often swam in waters right near Wells’ own home.

Researchers had also tracked Speck’s mother and grandmother before they died from swallowing fishing gear.

“Speck is somebody we have known from the time he was born,” said Wells, who began studying dolphins when he was 16.

“He was named after my dad.”

Red tide is suspected as the cause of Speck’s death, but researchers won’t know for certain until lab results come back in the next few weeks.

A natural phenomenon, red tide is caused by a microscopic single-celled organism called Karenia brevis, unique to the Gulf of Mexico. It releases a powerful neurotoxin that can become airborne, causing headaches, watery eyes, coughing and asthma attacks in people.

Ecologists say the organism acts like a forest fire, clearing out weeds and allowing the landscape to start anew.

But once it multiplies, sea turtles and manatees may inhale it, or die from eating too much neurotoxin-laced fish and sea grass. Symptoms include disorientation, lack of coordination, and seizures.

Red tide has been documented as far back as the 1500s by Spanish explorers.

“But the question now is what might we be doing to enhance it and make it stay longer?” said Richard Pierce, a senior scientist at Mote Marine Laboratory and expert in ecotoxins.

Sometimes expanding and other times ebbing, it has descended on the west coast of Florida from Tampa to Naples, a nearly 200-mile (320-km) span.

The same may hold true for red tide, experts say.

The smell of rotting fish has been a gut punch to Florida’s economy, sapping millions in revenue from fishing and tourism in peak season.

“It’s hurt our business I’d say around 40 per cent.” Residents hope that lawmakers and government officials will take action on restoring water flow southward through the Everglades, building inland reservoirs where pollutants can seep out before reaching the coast, and cutting back on fertilizers.

In the meantime, there is no end in sight to the current red tide outbreak.

Wells recalled that dolphins continued to suffer once the last major outbreak of red tide in 2005-2006 had ended.

Only a couple of local dolphins were suspected to have died from red tide toxins that time.

But fish populations were decimated. Hungry dolphins are more likely to seek an easy meal on the end of a fishing line, and risk ending up dead themselves.