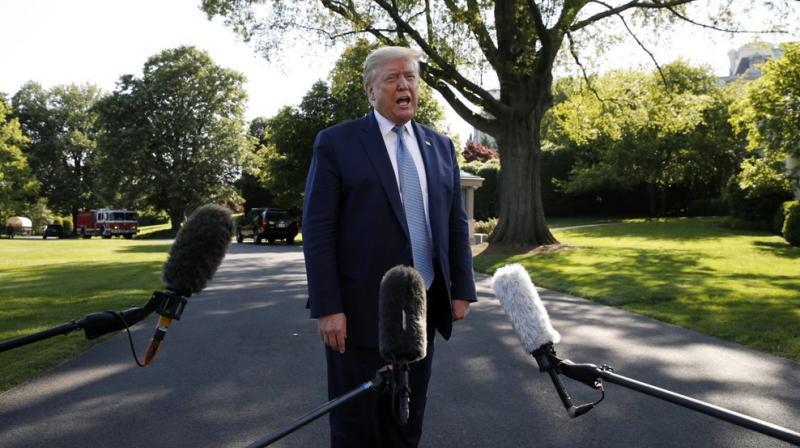 US president Donald Trump speaks with reporters as he departs the White House on Marine One. (AP)

Washington: For the first three years of his presidency, Donald Trump did not publicly utter the words “pandemic” or “preparedness.” Not in speeches, rallies or his many news conferences, planned and impromptu.

But on Friday, the White House pointed to extensive planning exercises the administration conducted and reports it wrote warning of the threat in 2018.

Still, Trump has repeatedly said that the blame for the federal government having inadequate stockpiles of crucial supplies and machines needed to cope with an outbreak lay with his predecessor, Barack Obama.

Obama has been a persistent foil for Trump on a number of issues, but in the case of planning for the pandemic he has devoted little attention to the 69-page “playbook” from the Obama administration about the threat of a viral outbreak that might include Ebola or an airborne respiratory illness like coronavirus. And the Obama administration could draw from a similar document written during the administration of George W. Bush in 2006.

The politics of pandemic planning have gotten increasingly pitched as the COVID-19 death toll continues to mount in the United States.

Trump claims he inherited a “broken, terrible” system from Obama. Critics counter that Trump had three years in office to prepare — more than enough time to build on the pandemic strategies he inherited.

The friction was laid bare in the Rose Garden and the White House briefing room on Friday.

Trump, at a midday event outside the Oval Office, declared: “I inherited nothing. I inherited practically nothing from the previous administration, unfortunately.”

His spokeswoman, Kayleigh McEnany, later displayed a copy of the Obama plan dismissively during a briefing in the White House press room before hoisting two binders of what she called the superior Trump plans.

She said it was intended to provide the White House with a set of questions it should ask early on in an emerging epidemic or pandemic threat.

“It outlined who should come together to answer those questions and to be prepared to anticipate what was coming next ... to get moving,” Cameron said. She said the Trump administration was slow to respond to COVID-19 and that Obama’s playbook could have helped the administration get ahead of an emerging threat like the coronavirus.

Cameron said the Bush and Obama administrations both did extensive planning for pandemics and many of those plans were passed to the Trump White House. “They were not political. They were non-partisan,” she added.

She said that in 2018 the Trump administration issued its own pandemic crisis action plan and last summer conducted Crimson Contagion 2019, a simulation to test the nation’s ability to respond to a large-scale outbreak. In January, the Department of Health and Human Services issued an after-action report.

“This exercise expounded upon — exposed rather — the shortcomings in legacy planning documents, which inform president Trump’s coronavirus response beginning as early as January,” McEnany said.

Her comments drew criticism from Ron Klain, who was the U.S. Ebola response coordinator during the Obama administration and now advises Democratic presidential hopeful Joe Biden.

“Let’s get to the bottom line,” Klain tweeted after McEnany’s briefing. “If their position now is that they HAD a plan, and that THIS was their plan ... I fail to see how that is a helpful argument for them in any way.”

The Trump administration’s 36-page National Biodefense Strategy, issued in September 2018, was a self-described “call to action.” Among the many goals was bolstering preparedness to save lives through “medical countermeasures,” such as vaccines, ventilators, diagnostic tests and personal protective equipment like medical gowns and masks that were in short supply in the early days of the pandemic.

McEnacy said the nation’s stockpile was insufficient, but didn’t answer questions about why Trump didn’t work to restock it during his first three years in office. The White House said the stockpile had only 28% of the items needed during a pandemic and contained less than a one-month supply of key items, but the administration is updating inventories and how they are distributed.

Cameron said Trump had plenty to study when he entered the Oval Office.

Bush took a keen interest in preparing the nation for an influenza pandemic after reading John M. Barry’s “The Great Influenza” about the 1918 influenza that killed more than 500,000 Americans and more than 20 million people across the globe.

He read the book in 2005 while at his Texas ranch. A few months later, Bush gave a speech at the National Institutes of Health rolling out the first modern-day national strategy to prepare for an influenza pandemic, detect outbreaks, expand vaccine production capacity and stockpile treatments.

“Unlike storms or floods, which strike in an instant and then recede, a pandemic can continue spreading destruction in repeated waves that can last for a year or more,” Bush said in the November 2005 speech.

Obama worked on the Ebola epidemic and also on H1N1 and the Zika virus. In 2014, Obama stood up the White House’s National Security Council Directorate for Global Health Security and Biodefense to coordinate government resources in preparation for the next disease outbreak and prevent it from becoming a pandemic.

There are scores of other pandemic planning books on the shelves, including the Biological Incident Annex, which was updated by the Obama administration and re-issued in January 2017 as Trump took office. The Pandemic Crisis Action Plan from 2018 that McEnany talked about is not online, but a General Accounting Office report references it.

“President Trump has been in office for well over three years now, which is more than enough to build upon the pandemic strategies he inherited,” said Lawrence Gostin, a public health expert at Georgetown University who worked with the Bush and Obama administrations on global health issues.

“It’s quite evident that whatever pandemic planning had been done during the Bush or Obama administrations never made it to high levels in the Trump administration.”

He thinks Trump was just focused on other issues — that pandemic planning wasn’t a top priority for the president.

Gostin said he was startled when Trump first said that no one expected a pandemic like COVID-19 to happen.