World   Americas  16 May 2020  China calls on US to pay its debts to the United Nations
World, Americas 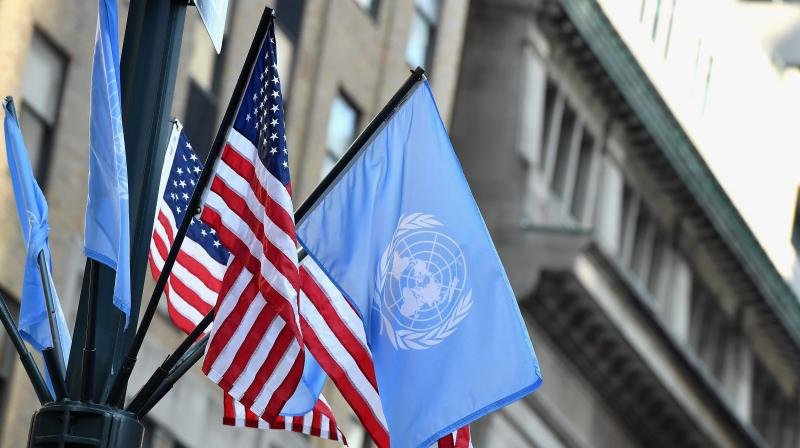 Flags of the United Nations and the United States of America are seen in New York City. (AFP)

United Nations: China on Friday issued a statement calling on all UN member states to "actively fulfill their financial obligations to the United Nations," stressing that Washington owes the organization more than USD 2 billion.

"As of May 14, the total unpaid assessments under the UN regular budget and peacekeeping budget amount to 1.63 billion and 2.14 billion US dollars respectively," the Chinese statement said, citing a report from UN Secretary-General's office and a meeting held on Thursday.

Including arrears that stretch back several years, "the United States is the largest debtor, owing 1.165 billion and 1.332 billion US dollars respectively," China added.

The US is the biggest contributor to the UN budget, paying 22 percent of its annual running costs, a bill which adds up to around USD 3 billion, and 25 percent of its peacekeeping operations, which amount to some USD 6 billion a year.

Officially, Washington is meant to pay 27.89 percent of the peacekeeping budget, but a decision made by Congress and implemented by President Donald Trump in 2017 cut that payment to 25 percent, meaning Washington runs up an annual shortfall of USD 200 million.

The United States also has a fiscal year that runs from October to October, which can make it look like an even bigger debtor at certain times of the year. There was no immediate response from the US mission to China's statement.

The payment of contributions by member countries for peacekeeping operations has a direct impact on the reimbursements the UN pays to countries that contribute troops to the 15 or so missions around the world.

In a report on May 11, Secretary-General Antonio Guterres warned that "there may be significant delays towards the middle of the year, unless the cash position across missions improves significantly." On Thursday, around 50 of the 193 member states, including China, paid their contributions in full, which Beijing -- the second largest contributor, far behind the United States -- noted in its statement. China pays around 12 percent of the UN's running costs and around 15 percent of the peacekeeping budget.