World   Americas  16 May 2020  Brazil's health minister resigns after one month on the job
World, Americas

Brazil's health minister resigns after one month on the job

Bolsonaro had earlier fired Teich's predecessor, Mandetta, on April 16, after disagreements over efforts to contain the new coronavirus 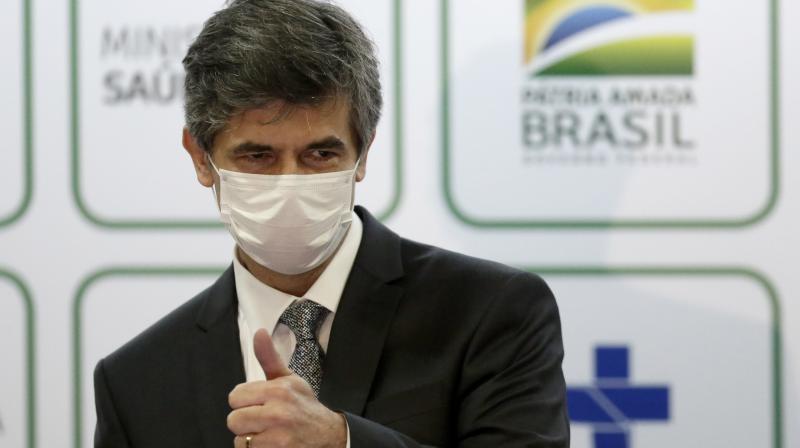 Brazil's outgoing Health Minister Nelson Teich gives a thumbs up before a news conference at the Health Ministry headquarters in Brasilia. (AP)

Sao Paulo: Brazil's health minister resigned Friday after less than a month on the job in a sign of continuing upheaval over how the nation should battle the coronavirus pandemic, quitting a day after president Jair Bolsonaro stepped up pressure on him to expand use of the antimalarial drug chloroquine in treating patients.

Dr Nelson Teich, an oncologist and health care consultant, took the job on April 17, and was faced with the task of aligning the ministry's actions with the president's view that Brazil's economy must not be destroyed by restrictions to control spread of the virus.

Teich's predecessor, Luiz Henrique Mandetta, also had rejected the use of chloroquine, which also had been touted by U.S. president Donald Trump as a treatment.

Officials say more than 13,000 people have died in Brazil from COVID-19, the disease caused by the coronavirus, though some experts say the figure is significantly higher due to insufficient testing.

The peak of the crisis has yet to hit Latin America's largest nation, experts say.

Gen. Eduardo Pazuello, who had no health experience until he became the Health Ministry's No. 2 official in April, will be the interim minister until Bolsonaro chooses a replacement.

Brazilian media have said that Teich's ability to do his job had been weakened by the appointment of dozens of military personnel to jobs in the ministry.

"Life is made up of choices and today I decided to leave," Teich told journalists in capital Brasilia. He did not explain why he left the job and refused to answer questions.

Teich's resignation came one day after Bolsonaro told business leaders in a video conference he would ease rules for use of chloroquine to treat people infected with the coronavirus.

Teich has frequently called use of the drug an uncertainty, and this week warned of its side effects.

The Health Ministry previously allowed chloroquine to be used in coronavirus cases only for patients hospitalized in serious condition.

Researchers last month reported no benefit in a large analysis of the drug or a related substance, hydroxychloroquine, in U.S. hospitals for veterans.

Last month, scientists in Brazil stopped part of a study of chloroquine after heart rhythm problems developed in one quarter of people given the higher of two doses being tested.

Rio de Janeiro Gov. Wilson Witzel, a former ally of Bolsonaro, said no one can do serious work with interference in ministries."

"That is why governors and mayors need to lead the pandemic crisis, and not you, Mr. President," Witzel said on Twitter.

The governor of Ceara, one of Brazil's most hard-hit states, said Teich's exit brings enormous insecurity and concern.

"It is unacceptable that in the face of this serious health crisis, the focus of the government is still on political and ideological discussions. That is an affront to the nation," Camilo Santana said.

Bolsonaro fired Teich's predecessor, Mandetta, on April 16 after disagreements over efforts to contain the new coronavirus.

The president opposed governors' quarantine recommendations and restrictions on businesses, was eager to resume economic activity and warned failure to do so would cause Brazil to descend into chaos.

Mandetta had sided with the governors and became the embodiment of challenges to Bolsonaro's position.

Teich took office pledging to balance health care concerns and the president's economic worries. He did not openly challenge the president's views, but did defend stay-at-home measures.

He clearly had limitations, Lago said. He would not challenge what has been consensus among the scientific community.

He would never accept the chloroquine thing that Bolsonaro wanted him to do, to recommend publicly that chloroquine was a remedy to be used in the public health system.

Risk consultancy Eurasia Group noted that while governors play a key role in responding to the virus, the Ministry of Health coordinates between states and ensures that medical equipment is distributed to states with more need.

The capacity of an effective coordinating role looks to have dropped with Mandetta's exit, analyst Filipe Gruppelli Carvalho said.

Ultimately, Teich's dismissal reinforces our view of increasing risks from the government's poor response to the pandemic, which could contribute to a weaker presidency and decline in support for Bolsonaro in the post-pandemic phase, he said.

After Teich's resignation was announced, pot-banging protests were heard in different regions of Sao Paulo and Rio de Janeiro.