Direct dialogue could lessen tensions in Jadhav case: US to India, Pak

A State Department spokesperson said that India and Pakistan could stand to benefit from practical cooperation. 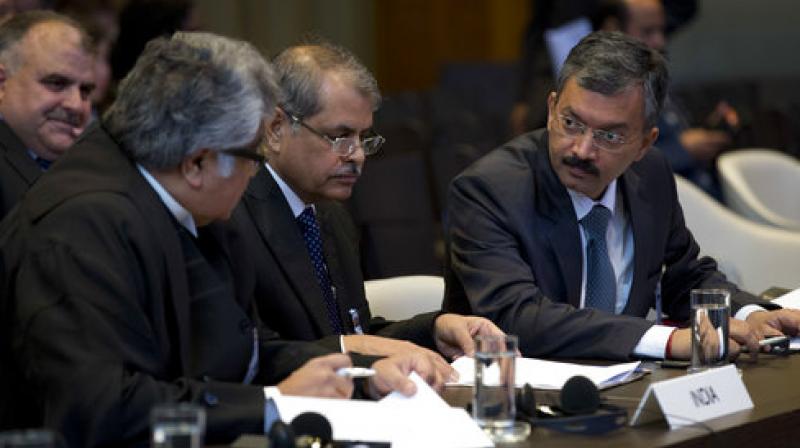 Deepak Mittal, joint secretary of India's Ministry of External Affairs, right, and his delegation wait for judges to enter the World Court in The Hague. (Photo: AP)

Washington: The US urged India and Pakistan to engage in direct dialogue to reduce tension as they faced-off at the International Court of Justice over the death penalty given to Indian national Kulbhushan Jadhav.

"We believe India and Pakistan stand to benefit from practical cooperation," a State Department spokesperson said.

When asked about the US' stand on the case of Jadhav, a former Indian Navy man who is facing the death penalty in Pakistan, the official said, "We encourage India and Pakistan to engage in direct dialogue aimed at reducing tension." Jadhav, arrested in March last year, has been sentenced to death by a Pakistani military court on charges of espionage and subversive activities. His sentencing has become the latest flashpoint in the India-Pakistan ties.

His execution was stayed last week by the ICJ, which on Monday heard arguments presented by both the sides.

India has petitioned the ICJ, urging it immediately suspend Jadhav's death sentence, expressing fears that Pakistan could execute him even before the hearing at ICJ.

On May 8, India moved the ICJ against the death penalty, alleging Pakistan violated the Vienna Convention on Consular Relations by repeatedly denying it consular access to Jadhav. India, in its appeal, has asserted that Jadhav was kidnapped from Iran, where he was doing business after he retired from the Indian Navy.

India has denied that he has any connection with the government.