We are ready to respond decisively to a Russian attack on Ukraine, which is still very much a possibility, Biden said 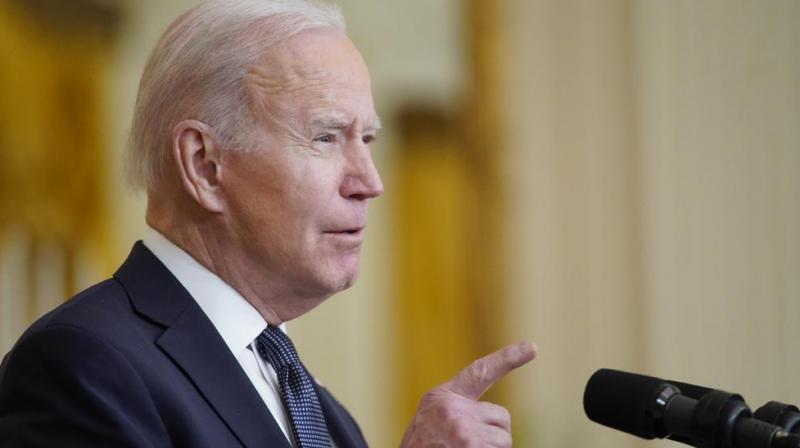 US President Joe Biden speaks about Ukraine in the East Room of the White House, Tuesday, Feb. 15, 2022, in Washington. (AP/Alex Brandon)

WASHINGTON: US President Joe Biden vowed Tuesday to push for a diplomatic resolution of the Ukraine crisis, but warned that a Russian invasion remained "very much a possibility" and that retaliatory sanctions were primed and ready.

Biden said that despite Russian claims earlier in the day, Washington and its allies had yet to verify the withdrawal of any of the 150,000 troops he says Moscow has now mustered along Ukraine's border.

"Analysts indicate that they remain very much in a threatening position," Biden said in an address on the crisis.

"The United States is prepared no matter what happens," the US leader said.

"We are ready with diplomacy," he said. "And we are ready to respond decisively to a Russian attack on Ukraine, which is still very much a possibility," Biden said, warning of "powerful sanctions."

Earlier, Moscow's defense ministry announced some soldiers and hardware were leaving the border region to return to their bases at the end of planned exercises.

After a meeting Tuesday with German Chancellor Olaf Scholz in Moscow, President Vladimir Putin said Russia "of course" did not want war, and was willing to look for solutions with the West.

"We are ready to work further together. We are ready to go down the negotiations track," Putin told a joint press conference with Scholz, confirming a "partial pullback of troops."

Scholz called the Russian announcement "a good sign," but Washington said it wanted proof of a de-escalation, after warning over the weekend that Russian troops were poised to invade Ukraine as soon as this week.

Biden, who spoke directly with Putin on Saturday, said there were "real ways" to address both sides' security concerns.

"We should give the diplomacy every chance to succeed," he said.

In answer to Putin's concerns that Ukraine would try to join NATO, and that the alliance would place more strategic weapons on Russia's borders, Biden said the United States had put forward "concrete ideas to establish a security environment in Europe."

However, he added on Ukraine: "We will not sacrifice basic principles though. Nations have a right to sovereignty and territorial integrity."

He noted that Russia is not being threatened by the United States, NATO or Ukraine.

"To the citizens of Russia: you are not our enemy. And I do not believe you want a bloody, destructive war against Ukraine," he said.

Scholz appeared to go further and reassure the Russians directly on the Ukraine-in-NATO question.

After meeting Putin, he told German reporters that Ukraine is not about to join the NATO alliance.

"There is one fact: Ukraine's joining NATO is not the order of the day," Scholz said.

"Everyone has to take a step back and realize that we cannot have a military conflict over a question that is not on the agenda," he said, saying that such a situation would be "absurd."

Kyiv remained tense after a series of cyberattacks shut down the websites of the country's defense ministry and armed forces as well as two state banks.

For weeks, defense experts have predicted that a Russian invasion would be preceded by a cyber offensive.

Both resumed service later Tuesday, but the military sites remained inaccessible hours after the initial reports of the attack emerged.

The two regions, Donetsk and Lugansk, have large Russian-speaking, pro-Moscow populations that have been locked in a deadly fight with Kyiv since 2014, with the conflict claiming some 14,000 lives.

Declaring them independent republics would effectively end the Minsk agreements peace plan for the ongoing war, and potentially open the door to bringing in Russian troops.

Russia already controls the Crimean Peninsula that it seized from Ukraine in 2014.