The Republican former president was accused of inciting riots in the Capitol which left five people, including a police officer, dead 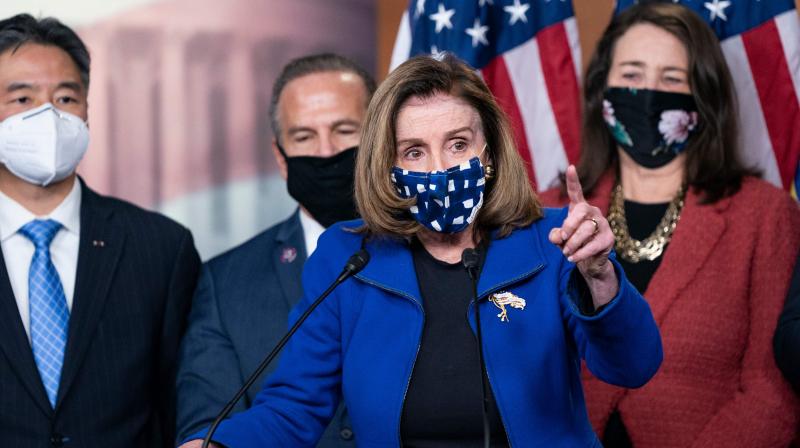 US Speaker of the House Nancy Pelosi, with House impeachment managers, speaks to the press after the Senate voted to acquit former US President Donald Trump, in the US Capitol in Washington, DC, on February 13, 2021. (Alex Edelman / AFP)

Washington: US House of Representatives Speaker Nancy Pelosi has proposed a 9/11-type independent commission to investigate the storming of the Capitol by supporters of former president Donald Trump on January 6, which is seen as one of the darkest days in the history of America's democracy.

Pelosi said this in a Dear Colleague letter on Monday, less than 50 hours after the Senate -- the upper chamber of US Congress -- acquitted Trump following an impeachment trial on charges of inciting his supporters to storm the Capitol hill, putting at risk the lives of hundreds of lawmakers.

It is clear from his findings and from the impeachment trial that we must get to the truth of how this happened, she said in a letter to her Democratic colleagues in the House of Representatives.

Her letter follows similar demands being made by lawmakers on both sides of the aisle. Three Republican congressmen -- Rodney Davis, John Katko and James Comer -- have proposed a bill that would create a bipartisan commission.

Pelosi, a top Democrat, further said in the letter: As we prepare for the Commission, it is also clear from General Honoré's interim reporting that we must put forth a supplemental appropriation to provide for the safety of members and the security of the Capitol, she said as the country observed President's Day, celebrating the birthdays of two greatest American presidents -- George Washington and Abraham Lincoln.

Indian-American Congressman Raja Krishnamoorthi, in a tweet supporting Pelosi, said: One of the darkest days in the history of our democracy deserves to be examined and investigated in great detail. We cannot dismiss and forget the violence that day or how close our republic came to being overthrown.

On February 13, the US Senate acquitted Trump in his second impeachment trial in just over a year, after the Democrats failed once again to muster enough votes to convict the former president on a charge of inciting the deadly insurrection at the Capitol on January 6.

The Senate voted 57-43 on Saturday to convict Trump on a single impeachment count  incitement of insurrection. But that majority of all 50 Democrats in the upper chamber of the US Congress, joined by seven Republicans, fell 10 votes short of the 67 needed for a conviction, two-thirds of the 100-member Senate.

The 74-year-old Republican former president was accused of inciting riots in the Capitol which left five people, including a police officer, dead.

Trump is the first president in US history to be impeached by the House of Representatives twice, and the first to be tried for impeachment after leaving office.

The National Commission on Terrorist Attacks Upon the United States, also known as the 9/11 Commission, was a bipartisan-panel established to create a full and complete account of the circumstances surrounding the September 11 attacks, including preparedness for and the immediate response to the attacks.

The commission -- chaired by five Republicans and five Democrats and convened by Congress as part of a legislation signed by former president George W Bush -- interviewed over 1,200 people in 10 countries and concluded that the FBI and CIA failed to adequately assess the terrorist threats, among other things.