PBSO K9 Kasper took a bullet that was meant for his K9 Partner. He is currently recovering and is in stable condition. 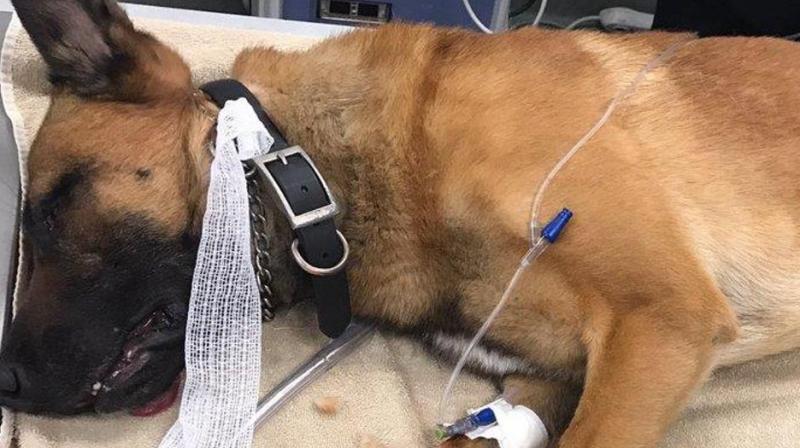 Suspect Phillip Oshea, again fired shots at the deputies while we were attempting to apprehend him. During the gunfire, K9 Kasper was shot. (Photo: Twitter)

Houston: A bomb-sniffing dog is being hailed as a hero after he took a bullet meant for his handler during a shootout.

K9 Kasper, who has protected President Donald Trump in the past, is recovering after being shot in the side when deputies with the Palm Beach Sheriff’s Office (PBSO) exchanged gunfire with a wanted man who was killed.

Phillip Oshea was accused of a shooting and robbery on Friday in Jupiter, Florida. Later that day, deputies came to apprehend him, and he fired shots at them, Fox 13 News reported.

“During the gunfire, PBSO K9 Kasper was shot while protecting his handler,” the sheriff’s office said in a Facebook post that included a photo of the wounded dog on a veterinarian’s operating table.

Deputies had pursued OShea to Jupiter following a shootout off Okeechobee Boulevard in which a police officer was injured while diving for cover.

Details of the final shootout were scant, but police said it took place in a parking lot.

During the encounter, Kasper was struck in the left hip by gunfire. The bullet missed his vital organs, and it was removed with surgery at Palm Beach Veterinary Specialists, according to a video posted on Twitter by the sheriff’s office.

The bullet was out and Kasper had recovered from anesthesia. The video showed him walking out of the clinic with relative ease.

“He’s on antibiotics and is walking fairly well, all things considered,” said Michele Tucker, the veterinary center’s managing director of patient services, on the video.

Kasper, a bomb-sniffing, patrol and street crimes dog, has protected Trump during his visits to Florida.