President Hassan Rouhani promised a thorough investigation into the 'unforgivable error' in an address on Tuesday. 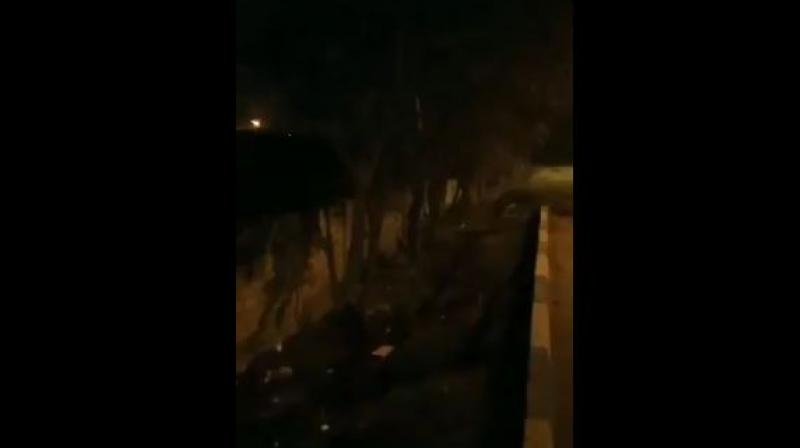 Wednesday's downing of Ukraine International Airlines flight 752, which killed all 176 people aboard, has created a new crisis for the Islamic Republic's clerical rulers. (Photo: Screengrab | Twitter)

Washington: Iran said on Tuesday it had arrested people accused of a role in shooting down a Ukrainian airliner and had also detained 30 people involved in protests that have swept the nation for four days since the military belatedly admitted its error.

A person who posted a video online last week of a missile striking the plane has been taken into custody by the elite Revolutionary Guards, the semi-official Fars news agency reported.

Wednesday's downing of Ukraine International Airlines flight 752, which killed all 176 people aboard, has created a new crisis for the Islamic Republic's clerical rulers.

President Hassan Rouhani promised a thorough investigation into the 'unforgivable error' in an address on Tuesday.

It was the latest in a series of apologies by the leadership that has done little to quell public anger.

Britain, France and Germany also increased diplomatic pressure on Iran, launching a dispute mechanism to challenge Tehran for breaching limits on its nuclear programme under an agreement which Washington abandoned in 2018.

Tehran has faced an escalating confrontation with the West and a wave of unrest since the United States killed Iran's most powerful military commander in a drone strike on Jan 3.

Iran shot down the plane on Wednesday when its military was on high alert, hours after firing missiles at U.S. targets in Iraq. It admitted the mistake on Saturday after days of denials.

US intelligence officials said on Jan. 9 that the heat signatures of two surface-to-air missiles were detected near the aircraft.

In Iraq, a military camp at Taji, north of Baghdad, was hit by Katyusha rockets Tuesday night but no casualties were reported, an Iraqi military statement said.

Iranian judiciary spokesman Gholamhossein Esmaili said some of those accused of having a role in the plane disaster had been arrested, although he did not say how many or identify them.

Since the official admission, protesters, many of them students, have held daily demonstrations, chanting "Clerics get lost!" and calling for the removal of Supreme Leader Ayatollah Ali Khamenei, in power for more than 30 years.

Police have responded to some protests with a violent crackdown, video posts on social media showed, with police beating protesters with batons, wounded people being carried, pools of blood on the streets and the sound of gunfire.

A video that emerged on Tuesday showed an officer using an electric baton to shock a man as he writhed on the ground.

Iran's police have denied firing at protesters and said officers were ordered to act with restraint. The judiciary said 30 people had been detained in the unrest but authorities would show tolerance towards "legal protests".

Protests on Tuesday appeared peaceful, with scores gathering at two Tehran universities. "Where is justice?" some shouted.

The extent of the unrest is difficult to assess because of limits on independent reporting. Demonstrations tend to gather momentum into the night.

The domestic unrest triggered by the plane crash comes just two months after the most violent crackdown on protests since the revolution. The authorities killed hundreds of people to put down an uprising in November when demonstrators torched banks and petrol stations.

Adding to international tension, the judiciary spokesman branded Britain's ambassador an "undesirable element", after he was briefly detained on Saturday, accused of inciting protests. The ambassador said he had been attending a vigil for victims.

London said it had not been notified of any move to expel its envoy, Rob Macaire, and said such a step would be regrettable. Iran's Foreign Ministry, rather than the judiciary, would be responsible for any decision to expel him.

London hosts a meeting on Thursday of Canada, Ukraine, Britain and other nations who had citizens on the plane. Ukraine said they would consider legal action against Tehran.

Rouhani said the government would be accountable to Iranians and those nations who lost citizens. Most of those on board the flight were Iranians or dual nationals.

A team of Canadian experts joining the investigation visited the crash site on Tuesday, an Iranian news agency reported. It followed a meeting in Tehran between experts from Canada, which had 57 citizens on the flight, Ukraine and Iran.

Canadian Prime Minister Justin Trudeau asked for Kiev's help in talking to Iran about identifying the bodies of the Canadian citizens who were killed, the Ukrainian president's office said.

The Royal Canadian Mounted Police (RCMP), which operates Interpol's national bureau in Canada, said it was working with Canadian police to collect some DNA samples from Canadian victims' families within Canada to assist with identification.

"Currently no on-site disaster victim identification assistance from Canada is required in Iran," RCMP said in a statement.

The shootdown and subsequent unrest comes amid one of the biggest escalations in tensions between Tehran and Washington since 1979.

Missiles launched at a U.S. base in Iraq killed an American contractor in December, an attack Washington blamed on an Iran-backed group. Confrontation eventually led to the U.S. drone strike on Jan. 3 that killed General Qassem Soleimani, architect of Iran's regional network of proxy militias.

Iran's government was already reeling from the reimposition of sanctions by the United States, which quit an agreement with world powers under which Tehran would secure sanctions relief in return for scaling back its nuclear programme.

Since Washington withdrew, Tehran has stepped back from its nuclear commitments and has said it would no longer recognise limits on enriching uranium.

After months of threatening to act, European signatories to the deal, France, Britain and Germany, activated the agreement's dispute mechanism on Tuesday. Iran criticised the move and said it wanted constructive steps to save the nuclear deal.