In rebuke to Trump, US Senate blames Saudi crown prince for Khashoggi’s murder

Trump said he wants US to stand by Saudi govt and prince, despite CIA assessment it was likely he ordered Khashoggi’s killing. 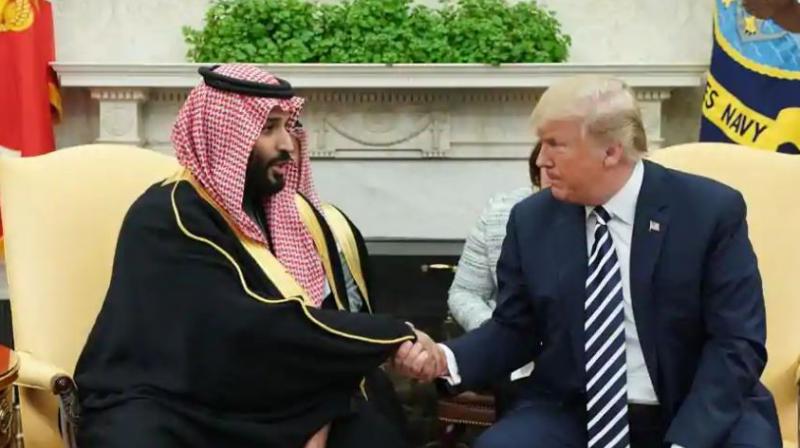 Washington: The US Senate delivered a rare double rebuke to President Donald Trump on Saudi Arabia on Thursday, voting to end US military support for the war in Yemen and blame the Saudi crown prince for the murder of journalist Jamal Khashoggi.

The votes were largely symbolic because to become law the resolutions would have to pass the House of Representatives, whose Republican leaders have blocked any legislation intended to rebuke the Saudis.

In a historic move, Senators voted 56-41 to end US military support for the Saudi-led coalition in Yemen’s civil war. The conflict has killed tens of thousands of people and spawned what the United Nations calls the world’s most dire human crisis, with the country on the brink of famine.

It was the first time either chamber of Congress had backed a resolution to withdraw US forces from a military engagement under the War Powers Act. That law, passed in 1973, limits the president’s ability to commit US forces to potential hostilities without congressional approval.

Seven of Trump’s fellow Republicans joined Senate Democrats to back the measure.

Immediately after the Yemen vote, the Senate backed a resolution blaming Saudi Crown Prince Mohammed bin Salman for Khashoggi’s murder and insisting that Saudi Arabia hold accountable anyone responsible for his death.

Khashoggi, a US resident who was a columnist for the Washington Post, was killed inside the Saudi consulate in Istanbul in October. The Senate vote, which was unanimous, puts pressure on House leaders to allow a vote on the Khashoggi resolution this month, before Congress adjourns for the year.

“Unanimously, the United States Senate has said that Crown Prince Mohammed bin Salman is responsible for the murder of Jamal Khashoggi. That is a strong statement. I think it speaks to the values that we hold dear,” said Republican Senator Bob Corker, chairman of the Foreign Relations Committee and sponsor of the resolution.

Trump has said he wants Washington to stand by the Saudi government and the prince, despite a CIA assessment it was likely he ordered Khashoggi’s killing. He promised to veto the war powers resolution.

Opponents of the resolution are reluctant to take any action to disrupt the strategic US relationship with Saudi Arabia, seen as an essential counterweight in the Middle East to Iran, arch-enemy of close US ally Israel.

Administration officials also see Saudi support as a linchpin for an Israeli-Palestinian peace plan yet to be unveiled by the Trump administration. And they have argued that ending US support could complicate Yemen peace talks.

Asked to comment on the Khashoggi resolution, a White House spokesperson noted sanctions imposed on 17 Saudis over the killing and said, “Our shared strategic interests with the Kingdom of Saudi Arabia remain, and we continue to view as achievable the twin imperatives of protecting America and holding accountable those responsible for the killing.”

But backers of the resolutions, including some Republicans, promised to press ahead. On Wednesday, a bipartisan group of senators promised to push in the new Congress legislation for humanitarian sanctions and a ban on weapons sales to Saudi Arabia.

“What’s next is to do everything possible to demand that the House of Representatives do what the members of the House want done, an opportunity to vote on this,” Senator Bernie Sanders told Reuters.

Sanders, an independent who caucuses with Democrats, said he would bring the resolution up again after the new Congress convenes in January, when Democrats will control the House of Representatives. The measure could pass the Senate again, given the bipartisan support it received on Thursday, even though Trump’s Republicans will have a larger majority in the upper chamber next year.

“I think we’re going to win in the Senate and I think we are going to do what the American people want, that is to end our participation in this horrific and destructive war,” Sanders said.

There was no immediate word from House leadership on whether they would allow a vote on either resolution.

Secretary of State Mike Pompeo and Secretary of Defence Jim Mattis, who briefed House members on Thursday, urged senators during a briefing last month to keep supporting the Saudi-led coalition.

Democratic Leader Nancy Pelosi said her members supported congressional action. “There certainly is an appetite in our caucus for that,” Pelosi, who is expected to be the next House Speaker, told reporters.

Yemen’s warring parties agreed on Thursday to cease fighting for the Houthi-held port city of Hodeidah and withdraw their troops, the first significant breakthrough for UN-led peace efforts in five years of conflict.