A spokesman for Haley said plans to buy the curtains were made in 2016 during the Obama administration and Haley had no say in the purchase. 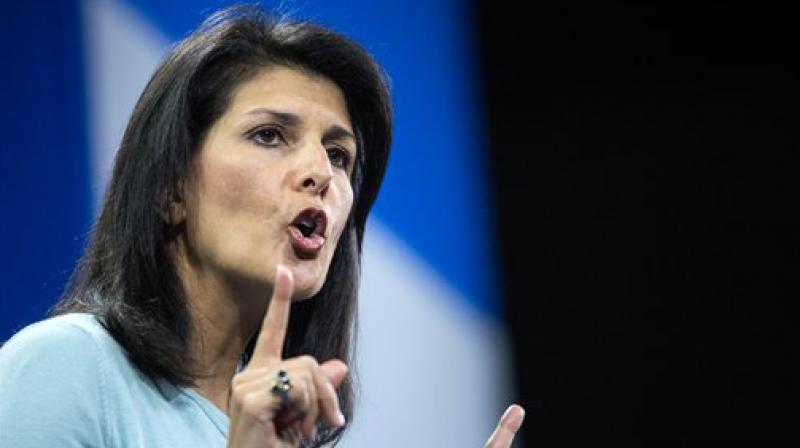 'All she's got is a part-time maid, and the ability to open and close the curtains quickly is important,' said Patrick Kennedy, the top management official at the State Department during the Obama administration, defending the purchase. (Photo: AP)

New York: The US State Department spent about USD 52,701 last year on customised and mechanised curtains for the official residence of US Ambassador to the UN Nikki Haley at a time when the department was undergoing deep budget cuts and had frozen hiring, according to a media report.

The report in The New York Times said Haley is the first US ambassador to live in the residence, located in a new building just blocks away from the UN headquarters here. A spokesman for Haley said plans to buy the curtains were made in 2016, during the Obama administration and that Haley had no say in the purchase.

The curtains themselves cost USD 29,900, while the motors and hardware needed to open and close them automatically cost USD 22,801, the report said, citing contracts.

The NYT report said that Haley's curtains are more expensive than the USD 31,000 dining room set purchased for the office of Ben Carson, the secretary of the Department of Housing and Urban Development. Following the controversial USD 31,000 purchase, President Donald Trump had even considered firing Carson.

“While Haley's curtains were being ordered and installed, Rex W Tillerson, the administration's first secretary of state, had frozen hiring, pushed out many of the department's most senior diplomats and proposed cutting the department's budget by 31 per cent. In embassies around the world, projects were eliminated, jobs were left unfilled and the delegation to last year's United Nations General Assembly meeting was slashed,” the report said.

The report quoted White House official in the Obama administration Brett Bruen as saying that how could more than USD 50,000 be spent on a customised curtain system for the ambassador to the UN when “you…tell diplomats that basic needs cannot be met.”

Patrick Kennedy, the top management official at the State Department during the Obama administration, however, defended the purchase, saying that it would probably be used for years and that it was needed for both security and entertaining purposes.

"All she's got is a part-time maid, and the ability to open and close the curtains quickly is important," Kennedy said.

Haley's predecessors had for decades lived in the Waldorf Astoria hotel near the UN but after the hotel was purchased by a Chinese insurance company, the State Department decided in 2016 to find a new residence for its top diplomat due to security concerns.

The NYT report said the government leased the apartment with an option to buy, according to Kennedy. "The full-floor penthouse, with handsome hardwood floors covering large open spaces stretching nearly 6,000 square feet, was listed at USD 58,000 a month,” it said.