World   Americas  14 May 2017  Video: Muslim-American woman kicked out of bank in US for wearing hijab
World, Americas

Video: Muslim-American woman kicked out of bank in US for wearing hijab

Jamela Mohamed had gone into a branch of Sound Credit Union in Washington state on Friday to make a car payment. 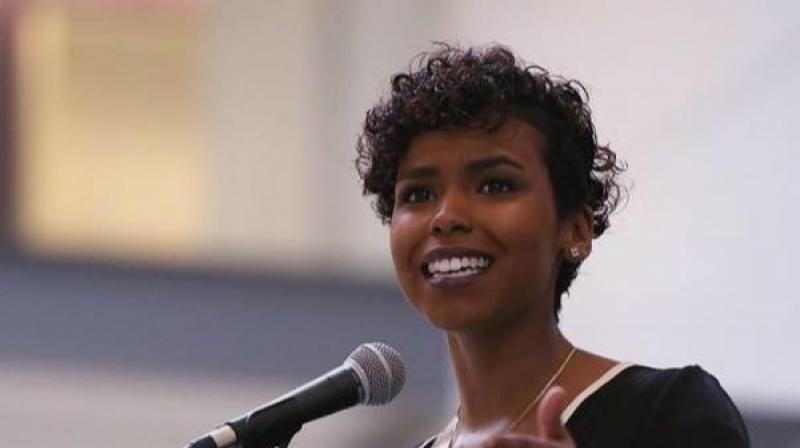 New York: A Muslim-American woman was allegedly kicked out of a bank in the US for 'wearing a hijab' - with staff threatening to call police if she did not 'remove her hood'.

Jamela Mohamed had gone into a branch of Sound Credit Union in Washington state on Friday to make a car payment. Jamela, an American and a member of the credit union, recorded part of the incident on her mobile phone, claiming it shows blatant 'discrimination'.

She said she had been wearing a sweater and had the hood up because it was a Friday, which is when Muslims offer weekly prayers in the afternoon. The teller asked Jamela, to take off her hood.

While she was waiting, Jamela says she took some video of the sign and of two male customers wearing baseball caps because they were being helped without any issues.

A sign inside the credit union says hats, hoods and sunglasses are not allowed, ABC-affiliated television station KOMO-TV reported.

Jamela said she was following the policy so she went to her car to grab her headscarf or hijab. She went back in with her scarf, while still wearing her hood, the report said.

"Why am I witnessing a man being serviced with a hat on and I'm being told to take off my hood?" she asked. "This is my hood. My face is showing and so I currently do have an issue today. I'm being polite, I'm complying. I simply stated that I just need to pay my car note today." She talked to a teller again. Then, a credit union supervisor approached her.

Jamela took cellphone video showing the branch supervisor counting to three and then saying she was going to call 911. "I didn't even get to utter a word," Jamela said.

That's right after the supervisor told her to remove her hijab. "You have to take your hood off!" said the woman in the video. Jamela was left in tears after being allegedly kicked out of the bank. "I feel so embarrassed right now," she said.

Sharing the video of her ordeal on Facebook, she wrote: "I never want this to happen to anybody and NOBODY should ever be treated this way. Thank you."

Sound Credit Union later posted on its Facebook page saying it did not handle the situation well, is apologising, and will make sure it never happens again. "It is clear our training needs to include more empathy and sensitivity to all cultures because as a credit union, we believe in equal treatment of all people," it said.