OceanGate Expeditions will launch a series of deep dives for people like Rojas who want to see the infamous shipwreck. 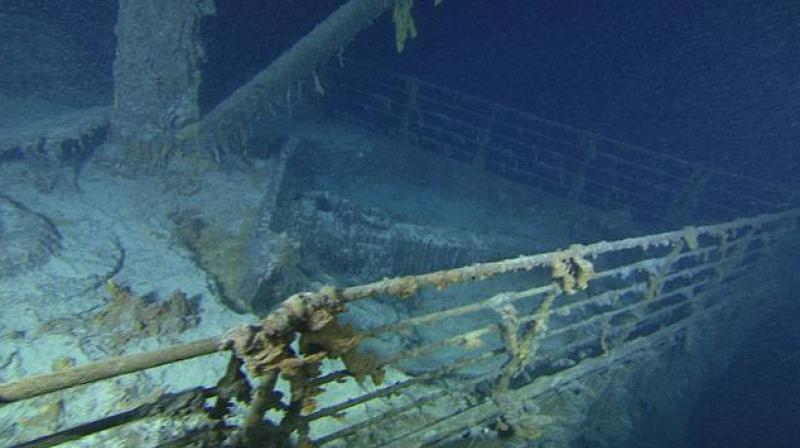 The starboard side of the Titanic bow. (Photo: AP)

New York: Renata Rojas has longed to visit the wreck of the Titanic since she was a girl, years before the ill-fated passenger liner was discovered on the seabed three decades ago.

Next year, the 49-year-old New York banker and diving enthusiast should finally realize her dream, and she is shelling out more than $105,000 for the privilege.

"I don't own an apartment. I don't own a car. I haven't gone to Everest yet. All of my savings have been going towards my dream, which is going to the Titanic," said Rojas, who last tried to visit the wreck in a 2012 centennial expedition that was canceled.

“I’ve made a lot of sacrifices over time."

Beginning May 2018, OceanGate Expeditions will launch a series of deep dives aboard a submersible for people like Rojas who want to see the infamous shipwreck.

The company has the only privately-owned manned research submarine in the world capable of diving to the Titanic's depth, with the other four such vessels in the hands of governments, according to chief executive Stockton Rush.

A lack of private subs, plus the hefty price tag for commercial trips, are key reasons the site has not been explored by dive teams in 12 years. Fewer than 200 people are estimated to have ever visited the wreck.

All told, more than 50 passengers, or "mission specialists" as OceanGate calls them, will set off from the Canadian island of Newfoundland in six scheduled eight-day trips.

The Everett, Washington-based company will take nine at a time on a ship to the site, with each of them given an assignment such as photographing artifacts from the debris field. From there, they will take turns diving in the small submarine to get a close-up of the hulk.

The object of their fascination is RMS Titanic, which sank in the early hours of April 15, 1912 after ramming into an iceberg on its maiden voyage from England to New York, killing more than 1,500 people.

The wreckage, located in 1985, lies on the floor of the North Atlantic 370 miles (600 km) south-southeast of Newfoundland at a depth of more than 2 miles.

One of the worst maritime disasters ever, the sinking of the state-of-the art liner sparked outrage and grief, and still stirs deep emotions for many.

Rojas said this is because it was "a tragedy that wasn't supposed to happen."

"It disappeared for years, it was mystical, and that attracts a lot of people," she said. "That's what attracted me to it."

It was the inspiration for James Cameron's 1997 film "Titanic," a tragic love story that became one of the most nominated movies in Academy Award history.

But it was an earlier telling of the disaster that caught the eye of Rojas, who recalls watching the 1958 movie "A Night to Remember" when she was a young girl.

"I actually wanted to find the wreck but somebody beat me to it," said Rojas, whose father taught her to dive at the age of 12 in her home country of Mexico.

When not working for Banco Sabadell in Manhattan, she spends much of her free time exploring shipwrecks in the waters off New York and New Jersey.

Rojas, who will help monitor and operate the sonar system while aboard the submersible, said she was making the expedition to the Titanic because of her tight connection to the story.

"I don't want any distractions,” she said. "It's such an emotional experience for me, and I think I want to take it all in by myself."

OceanGate's Rush, a submersible captain, said the expeditions have been in the works for three years.

The expedition is not a "tourist trip" but rather an opportunity to collect data on the wreck's decay," Rush said.

"It’s a blend between pure research and exploration, and certainly there’s an entertainment component to it," conceded Rush. "We know everyone’s going to want to see the bow because that image is so iconic."

Marc and Sharon Hagle, a pair of avid adventurers from Winter Park, Florida, have also purchased tickets. The couple were visiting the South Pole last year when they decided to make their next great excursion deep underwater.

"It's not a money thing," said Marc, who invests in real estate. "One of our personal goals in life is to not be sitting around in a rocking chair when we are 100-years-old saying, 'I wish I had done that.'"