Afghanistan: At least 36 ISIS terrorists killed in US air strike

The huge bomb, delivered via an MC-130 transport plane, has a blast yield equivalent to 11 tons of TNT. 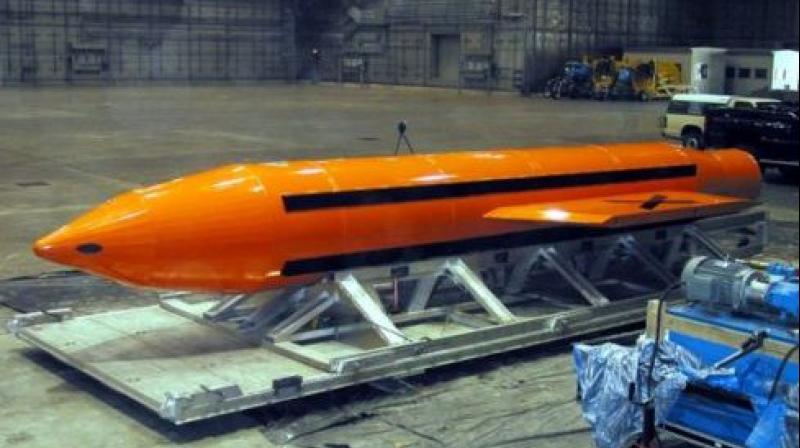 US drops Mother Of All Bombs at ISIS hideouts in Afghanistan (Photo: Twitter)

Jalalabad: The US military's largest non-nuclear bomb killed at least 36 militants as it destroyed a deep tunnel complex of the Islamic State group, Afghan officials said Friday, ruling out any civilian casualties.

The GBU-43/B Massive Ordnance Air Blast bomb -- better known as the "Mother Of All Bombs" -- hit IS hideouts in Achin district in eastern Nangarhar province on Thursday.

"As a result of the bombing, key Daesh (IS) hideouts and a deep tunnel complex were destroyed and 36 IS fighters were killed," the defence ministry said in a statement.

The huge bomb, delivered via an MC-130 transport plane, has a blast yield equivalent to 11 tons of TNT, and the weapon was originally designed as much to intimidate foes as to clear broad areas.

"The explosion was the biggest I have ever seen. Towering flames engulfed the area," Shinwari told AFP. "We don't know anything about the casualties so far, but since it is a Daesh (IS) stronghold we think a lot of Daesh fighters may have been killed."

An Afghan militant source told AFP from an undisclosed location that locals had described the ground shaking "like an earthquake", with people being knocked unconscious by the blast.

It added to concerns among investors already wary of risks over Syria and North Korea, as well as the outcome of the French presidential election. The assault came only a week after Trump ordered missile strikes against Syria in retaliation for a suspected chemical attack.

Meanwhile Trump has said he is keeping "all options" on the table to stop North Korea's nuclear programme, as speculation mounts that Pyongyang may soon hold another nuclear test.

Nangarhar, which borders Pakistan, is a hotbed of IS militancy. US forces have conducted a number of air strikes on jihadist bases in the area since August last year.

IS, notorious for its reign of terror in Syria and Iraq, has been making inroads into Afghanistan in recent years. It has attracted disaffected members of the Pakistani and Afghan Taliban as well as Uzbek Islamists.

But the group has been steadily losing territory in the face of heavy pressure both from US air strikes and a ground offensive led by Afghan forces.