The fires have swept through California's wine country, leaving thousands of people homeless. 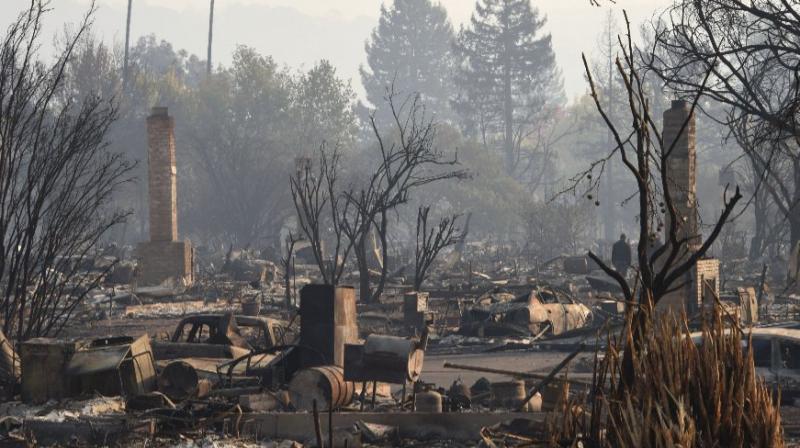 In cases in which bodies have been badly burned, authorities have had to use dental records for identification. (Photo: AFP)

Santa Rosa: The death toll from raging wildfires has risen to 31 as body recovery teams used cadaver dogs to locate victims, making it the deadliest series of blazes in the state's history.

The fires, which began on Sunday, have swept through California's wine country, leaving thousands of people homeless and burning over 190,000 acres (76,000 hectares) of land.Gusty winds yesterday were hampering the efforts of the 8,000 firefighters battling 20 blazes, and weather conditions were not forecast to improve.

"What this means is that our fires will continue to burn erratically," fire chief Ken Pimlott told a news conference. "They have the potential to shift in any direction at any time.

"We are a long way from being done with this catastrophe," he said.

The California Department of Forestry and Fire Protection (Cal Fire) announced yesterday that the fires have claimed 31 lives, while Sheriff Rob Giordano of hard-hit said his department has received around 1,100 reports of missing persons.

Of those, "745 of them, roughly, have been located safe," while "we still have 400 outstanding," Giordano said, noting that the actual figure may be smaller because there are sometimes duplicate reports.

He said targeted body recovery efforts had begun in cases where all other leads were exhausted.

"We're moving into a recovery phase," he said. "We have cadaver dogs up here that can basically scent bodies and help us find people."

Giordano warned that it was "going to be a slow process" as fires continue to burn, and that identifying victims would be difficult.

"Some of these remains are actually intact bodies -- much easier to identify, much easier to get things from. Some of them are merely ashes and bones, and we may never get truly confirmative identification on ashes," he said.

In cases in which bodies have been badly burned, authorities have had to use dental records and serial numbers on medical devices to identify the dead.

Asked if he expected the death toll to rise, Giordano replied: "I'd be unrealistic if I didn't."

More than 200 fire engines and firefighting crews from around the country were being rushed to California to help battle infernos pic.twitter.com/LxKnJWfp4O

The sheriff said that of the 17 people confirmed dead in , 10 have now been identified.

As recovery teams fanned out searching for fire victims, evacuation orders were issued for towns in wine-producing and counties, where hundreds of people have already lost their homes to the fast-moving infernos.

Residents of Calistoga, a resort town of some 5,000 people in , and Geyserville, a town of around 800 people in , were told to leave and seek shelter elsewhere.

Entire neighborhoods in have been reduced to ashes, and evacuation orders were issued for additional parts of the devastated city of 175,000 people in .

"These winds will continue to challenge firefighters in their efforts towards containment and will increase the risk for new fires," Cal Fire said.

The National Weather Service said wind gusts of up to 80 kilometers per hour were forecast in some areas and the "critical fire weather conditions" would continue into the weekend.

Pimlott, the Cal Fire chief, said hundreds of fire engines and dozens of firefighting crews were being brought in from other states.

"Hour by hour more resources pour in," he said.

A state emergency management official said the authorities were looking into bringing in firefighters from as far away as .

David Shew, a veteran firefighter with Cal Fire, said the wildfires were like nothing he's seen before.

"I've been with Cal Fire for 30 years and I've seen big fires," he said. "But this is extraordinary, having that many and that large and going so fast."

Thousands of people have been left homeless and 25,000 people have evacuated their homes in alone, according to officials.

More than 3,500 homes and businesses have been destroyed, including several wineries in and counties, the heart of the state's extensive wine production.

President Donald Trump has declared a major disaster in , freeing up federal funding and resources to help fight the fires, and Governor Jerry Brown has declared a state of emergency in eight counties.

Michael Desmond, 63, was among the hundreds of residents of 's neighborhood who lost their homes.

"I feel violated, like a thief came in," said Desmond, who sobbed as he surveyed the rubble of the house where he grew up.

Forest fires are common in the western during the summer but this year's blazes in are the deadliest series of fires to hit the state.