The Pakistani military confirmed the release and said the family was 'being repatriated to the country of their origin.' 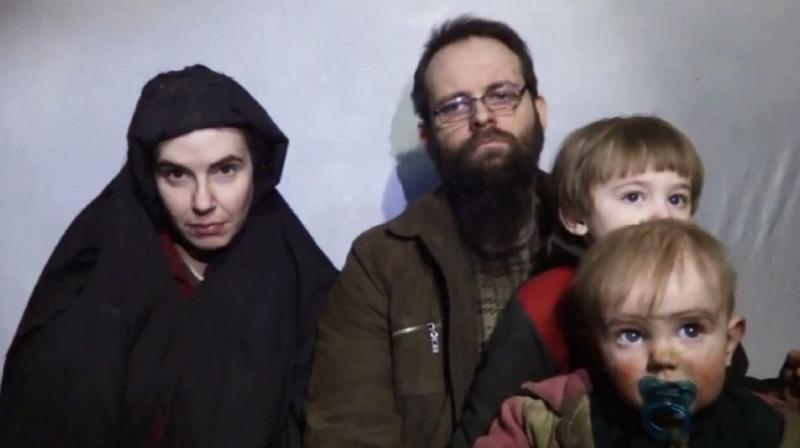 US officials said Pakistan secured the release of Caitlan Coleman of Stewartstown, Pennsylvania, and her husband, Canadian Joshua Boyle, who were abducted five years ago, while traveling in Afghanistan and had been held by the Haqqani network. (Photo: Twitter/@Genlawang1)

Washington: An American woman, her Canadian husband and their three young children have been released after years of being held captive by a group with ties to the Taliban and called a terrorist organization by the United States, American and Pakistani officials said on Thursday.

US officials said Pakistan secured the release of Caitlan Coleman of Stewartstown, Pennsylvania, and her husband, Canadian Joshua Boyle, who were abducted five years ago, while traveling in Afghanistan and had been held by the Haqqani network.

Ms. Coleman was pregnant when she was captured. The couple had three children while in captivity, and all have been freed, US officials said.

“Yesterday [Wednesday], the United States government, working in conjunction with the Government of Pakistan, secured the release of the Boyle-Coleman family from captivity in Pakistan,” President Donald Trump said in a statement. “Today, they are free.”

Trump later praised Pakistan for its willingness to “do more to provide security in the region” and said the release suggests other “countries are starting to respect the United States of America once again.”

The Pakistani military confirmed the release and said the family was “being repatriated to the country of their origin.”

But as of Thursday morning, the family’s precise whereabouts were unclear and it was not immediately known when they would return to North America. The family was not in US custody, though they were together in a safe, but undisclosed, location in Pakistan, according to a US national security official, who wasn’t authorized to discuss the case publicly and spoke on condition of anonymity.

US officials had planned on moving the family out of Pakistan on a US transport plane, but at the last minute Boyle would not get on, the official said.

Another US official said Boyle was nervous about being in “custody” given his background. He was previously married to the sister of Omar Khadr, a Canadian man who spent 10 years at Guantanamo Bay after being captured in 2002 in a firefight at an al-Qawda compound in Afghanistan.

Officials had discounted any link between that background and Boyle’s capture, with one official describing it in 2014 as a “horrible coincidence.”

The couple has told US officials that they wanted to fly commercially to Canada.

The release came together rapidly on Wednesday. It happened nearly five years to the day since Coleman and Boyle lost touch with their families while traveling in a mountainous region near the Afghan capital of Kabul.