Indian-American group seeks US, UN intervention in protecting rights of Yazidis in Iraq

The ISIS has been brutally attacking the Yazidis. It has led to their exile from their ancestral lands in Northern Iraq. 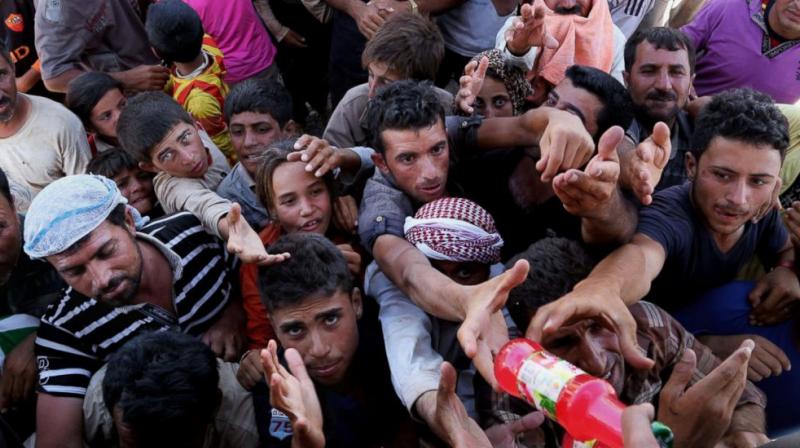 Displaced Iraqis from the Yazidi community gather for humanitarian aid at the Iraq-Syria border at Feeshkhabour border point. (Photo: AP)

Washington: An Indian-American think tank has sought the intervention of the US and the UN in protecting the rights of Iraq’s Yazidis ethnic community that has been facing brutal persecution by the Islamic State terror group.

Nearly 400,000 Yazidis have been displaced to different parts of Iraq, Turkey and other countries, according to a report ‘Plight of the Yazidis’ that was released by the Foundation for India and Indian Diaspora Studies (FIIDS-USA).

The report presents the facts and figures about the genocide of Yezidis which it alleged has been going on since 2014.

Mirza Ismail, a Yazidi and human rights activist based in Canada, elaborated how the Yazidis in Iraq had been brutally attacked by the ISIS since August, 2014. As many as 10,000 men have been killed and 7,000 women abducted from the community, the report said.

He also demanded the UN and international leaders to intervene and support the creation of an “autonomous region” for the Yezidis as given under the Iraqi constitution.

Yazidis are a Kurdish-speaking minority with a pre- Islamic religion thought partly to have its origin in the Zoroastrianism of ancient Persia. They are neither Arab nor Muslim and the ISIS considers them polytheistic heretics.

The ISIS has been brutally attacking the Yazidis. It has led to their exile from their ancestral lands in Northern Iraq.

Yazidi women have been abducted under a so-called “forced conversion campaign” that has been carried out by the dreaded terror group in Northern Iraq.