The replica gun can be seen lying next to her in the video. 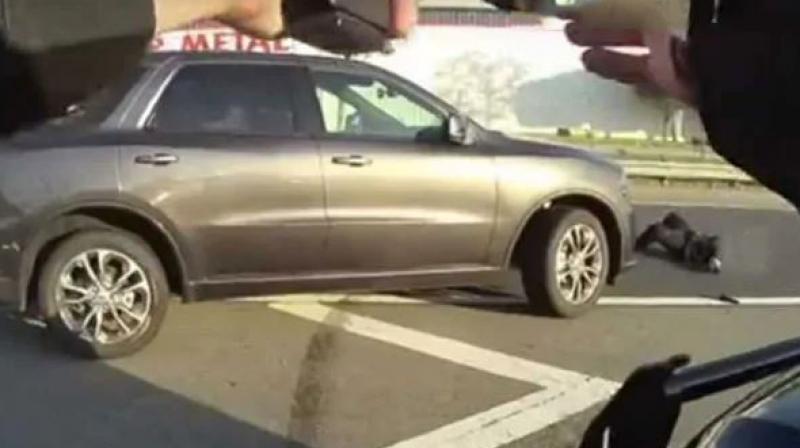 The video footage showed the officer exiting his car and walking around the van Williams was driving. (Photo: Screengrab)

California: A 17-year-old girl killed by a California police officer last week appears to have been pointing a replica gun at the officer when she was shot, video footage released Friday showed.

The graphic video, released by the Fullerton police department following questions from the teen's family, shows Hannah Williams collapsing and pleading for help after she was shot on July 5.

The replica gun can be seen lying next to her in the video.

Police on Friday also released audio of an emergency call the teen's father, Benson Williams, made about 90 minutes after the shooting to report his daughter missing.

Williams tearfully tells the dispatcher in the call that he fears his daughter might harm herself and that she was on anti-depressants.

Police said the deadly encounter unfolded after the officer involved in the shooting spotted the teen driving at high speed on a freeway as he was taking his K-9 dog to the veterinarian.

He chased her vehicle and attempted to stop her, but at some point she made an abrupt U-turn into oncoming traffic and skidded to a stop facing the wrong way.

The video footage showed the officer exiting his car and walking around the van Williams was driving. As he approaches the driver's side of the vehicle, he is confronted by Williams who can be seen walking towards him with her arms outstretched in a "shooting stance."

Shots are then fired and Williams is seen collapsing on the ground and pleading for help.

The teen's family have questioned the circumstances around the shooting and have called for state authorities to launch an independent investigation.